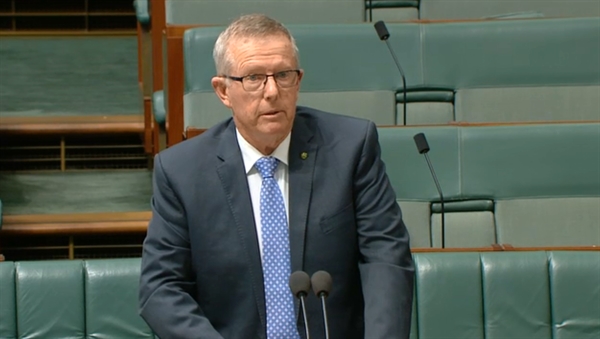 Mr COULTON (Parkes—Assistant Minister for Trade, Tourism and Investment) (11:25):  I too take great pleasure in rising today to speak on the Treasury Laws Amendment (Supporting Australian Farmers) Bill 2018. I'd hoped that the member for Lyons might stay here for a minute. He might learn something. I will not be lectured by the Labor Party about responses to drought. I have been in this place for more than a decade, and for three decades before that I was a farmer. I have lived through the Keating years, when we were paying 22 per cent interest, and I know what it's like trying to farm in that area. I was in this House when the member for Watson, as the minister for agriculture, changed drought policy. He said: 'We don't have drought policy anymore. We now won't even refer to the word “drought”. We are going to refer to it as “dryness”. Because of climate change, we're going to have “dryness”.' He talks about farmers wanting to adapt to climb climate change. Well, I can tell you our farmers are way ahead of the field, mate. I have my colleague here with me. When he was the shadow minister for the environment, he got to see what my farmers are doing with zero-till, where they're conserving every drop of moisture and growing crops now in adverse climates. Your mates in the Greens want to ban glyphosate, so even that's going to be harder.

We hear the members opposite talking about there being no response to the drought. The federal government has committed $1.8 billion so far, and that figure is rising. The former minister for agriculture Barnaby Joyce's white paper brought in accelerated depreciation for fodder storage, water, grain silos and fencing. Previously it was 15 to 20 years; it was brought back to three years. This legislation brings it back to instant asset write-off. If the members opposite actually knew something about regional Australia, not just what they saw on Facebook or popular TV shows, they might know that that policy has made a big difference in how farmers are impacted by this drought. I've spoken to many of my farmers who are now selling grain at a good price because they took the initiative that was offered to them by the government and have invested in their own storages. This patronising idea that I'm getting from members of the Labor Party that somehow farmers need the government to tell them what to do and are somehow poor, helpless individuals is something I find deeply offensive, and so do the people that I represent.
This legislation is very much appreciated and welcomed by the farmers that I represent, because farmers are not victims. Farmers will know that this is a genuine piece of legislation that will help them plan for the next drought. It gives them greater control not only in their preparedness for drought but in the general marketing and storage of their own product. At the moment, we have a crisis because of the shortage of hay. One of the reasons for this is that the vast majority of all hay that is produced never leaves the farm that produces it. It is cut and stored in preparation for drought. This legislation will enable farmers, when the seasons return and they end up with a wool cheque or a grain crop, to instantly depreciate the cost of a hay shed so that they can store more hay on farm, ready for the next drought.

This legislation that we're talking about today will certainly make preparation more appropriate and easier for them to do for the next drought. When production does return, they'll be able to take advantage of the markets that are opening up now through the free trade agreements that are being negotiated—some are already agreed to; some are before the House at the moment—which will enable them to trade on the global stage at an advantage over our competitors. I support this legislation. I know that the farmers I represent support this legislation. They are pleased to see a government that's actually putting in practical measures, not the philosophical, ideologically driven, patronising discussions that we're hearing from the other side.

The cash storage through the farm management deposits scheme is very important. The fact that farmers can withdraw that in less than the 12-month period during a period of drought, to enable that cash to be used to help through the drought to purchase that fodder, is very important.
This morning I spoke to one of my constituents, who was unloading a load of hay, and he said that load of hay has brought his fodder bill for this drought up to $400,000. That's what one farmer has spent on fodder. He said that because he had the money in a farm management deposit scheme, put aside for that very purpose, he's managed this drought. Those opposite would have the government in control of what farmers do.

I have heard academics in the last couple of weeks talk about, 'Maybe we're going to need legislation, so that farmers can be instructed where they're going to grow certain crops or run livestock.' I can tell you one thing that farmers don't want: they don't want the government in their lives. They want the government to provide positive programs like this. Legislation like this will help them.

I can tell you that the farmers in Australia are the most productive and the most innovative in the world. This legislation is very, very important. This legislation, to be honest, is not going to help farmers through the current drought; this legislation is all about preparedness for the next one. During the current drought, we are supplying farmers with household support. That money is to provide some dignity to take the pressure from the daily lives of farmers that need to worry about how they're going to clothe and get food for their families, and basic essentials such as that.

Major General Day has been appointed as drought coordinator to facilitate and coordinate some of the programs that are going along now. I know that last week he was speaking to the charities to try and get a coordinated approach, so that we don't have areas that are falling through the cracks.

Social media has brought this drought and plight of farmers to the people in the cities. The support that's coming from people away from farms has been exceptional, and I know it's very much appreciated. But one of the downsides of social media campaigns is that the true situation is probably not presented. When people see a picture of a skinny cow there could be various reasons why that cow is in that condition and it's not always as portrayed. As I've touched on earlier, one of my concerns about the current drought is that farmers are being portrayed as a group that have lost control of their own industry, and their own destiny, and that's far from the truth. They're incredibly resilient.

I don't come into this place speaking from theory or philosophy; I've actually lived through droughts as a farmer. Several times in my life I've gone through drought seasons where we haven't grown a grain for the entire year. I know what it's like trying to purchase sugarcane tops from the coast to feed cattle when you've exhausted your own supplies. I know what it's like to spend night after night on a machine baling hay in preparation for the next drought. I know the work that's involved in this. I stand up here today in support of the farmers that I represent and the farmers of Australia, knowing that this drought will end, knowing that they will step up and be back in production very, very quickly and knowing that the vast majority of them out there now, while it's incredibly difficult, are managing this because they have prepared. They have prepared because of previous policies put in place by this government.