Greens are a Steak short of a Barbeque 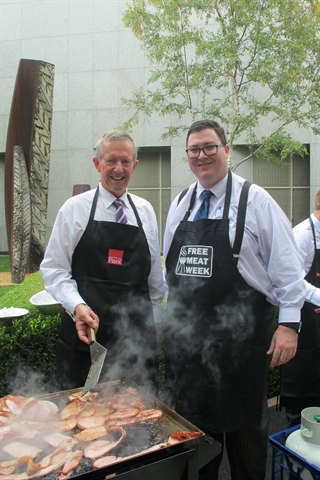 Federal Member for Parkes, Mark Coulton has hit out at the campaign to make this a “Meat Free Week” and has encouraged his colleagues to instead attend a “Free Meat Week” barbeque at Parliament House.

“This petty campaign against meat producers is simply an ill-conceived attempt to turn Australia into a meat free country,” said Mr Coulton.

“We have the best farmers in the world, and that includes farmers in the beef and sheep meat industries. These farmers care about their animals and have the highest standard of animal handling of any meat producing nations.”

“Many of these farmers are doing it tough at the moment, with the drought. This is a time when farmers need our support yet we have these Green groups running around and encouraging Australians to live meat-free,” Mr Coulton said.

Mr Coulton said that the whole campaign for a “meat free week” was an attempt to persuade Australians to become vegetarian or vegan and followed on from the campaign to ban live animal exports.

“Meat develops proper cognitive function and increases your lifespan. It helps to develop strong muscles and ensures a healthy balance of hormones within the human body. Vitamin B12, which can only be obtained from meat, is crucial to a healthy nervous system.”

“My colleague George Christensen from Queensland has initiated a counter-campaign and will be holding a barbeque in support of farmers.”

“Whilst I do not deny anyone the choice to be vegetarian, I don’t believe that this choice should be forced onto others. I encourage every Australian to support our meat industry and have a barbeque, and invite some friends over for a “Free Meat Week” barbeque,” said Mr Coulton.

More information about the campaign to support farmers through Free Meat Week can be found at www.freemeatweek.com.au.