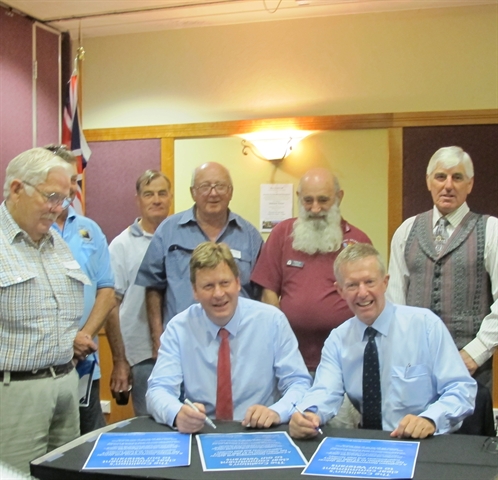 In April last year I invited the then Shadow Minister for Veteran’s Affairs, Senator Michael Ronaldson to the Electorate to meet with Veterans to discuss the fair indexation of the Defence Forces Retirement Benefits (DFRB) and Defence force Retirement and Death Benefits (DFRDB) military superannuation pensions.

Senator Ronaldson and I both publicly pledged to deliver fairness to military superannuants if there was a change of Government at a meeting with veterans in the Dubbo last year.

Last week legislation was introduced into the parliament to address this issue and bring some fairness to the indexation of these military benefits.

Previously both the DFRB and the DFRDB were indexed at CPI. After these changes are introduced the indexation of both military pensions will be brought in to line with other service pensions and the aged pension.

The Coalition has been seeking to make these changes over a number of years. Moves to introduce this legislation from opposition were blocked by Labor and the Greens in the previous Government.

The legislation must still pass through both Houses of Parliament before it is passed into law however we are now on track in ensuring that the Coalition Government keeps this important election commitment.

The fair indexation of the DFRB and the DFRDB will come at a cost of $162 million over four years, which is substantial. Nonetheless, the special contribution of those that have served Australia in the military must be recognised and we must provide adequate support for those who have served our country. There are roughly 57,000 superannuants who will receive the benefit of these improved changes which is a significant number. The legislation, once passed in both Houses of parliament, will be put into effect from the 1st July 2014.

I thank the Prime Minister and the Minister for Veterans’ Affairs, Michael Ronaldson for acknowledging the importance of this reform on behalf of veterans in the Electorate of Parkes.

Delivering on our election promises is very important for the Government. I am very pleased to see this legislation introduced to the House of Representatives, and trust that it will move promptly through the Senate for the benefit of our military superannuants.