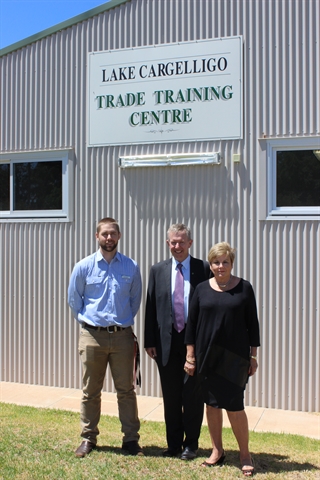 Young people in the Central West will be able to gain valuable skills through a new facility officially opened at Lake Cargelligo Central School.

The Lake Cargelligo Trade Training Centre will offer local secondary students qualifications in construction and hospitality with courses to be run at Lake Cargelligo Central School and TAFE Riverina Institute.

Parliamentary Secretary to the Minister for Education, Senator the Hon Scott Ryan, said Australian Government funding of more than $1.4 million helped bring the centre to fruition.

“The skills being imparted at the centre will address shortages in the trades of cook and carpenter,” Senator Ryan said.

“The centre includes a new construction workshop, a refurbished food technology facility complete with a commercial kitchen, as well as high quality equipment across both sites.”

“The entire school community and other individuals came together in a spirit of cooperation,” Mr Coulton said.

“They thought about the region’s future needs, worked out what was best for the young people of the area, and devised a plan that makes a tangible difference.”

Mr Coulton said the Lake Cargelligo Trade Training Centre was an example of the local community putting students first  an approach also being followed by the Australian Government in regard to school education generally.

“In the 2014 school year and beyond, the Government will build an education system that gives all students – no matter where they live and what school they attend – the tools to succeed in their chosen field of endeavour,” Mr Coulton said.

“The ultimate purpose of these reforms is to foster a smart, skilled Australian workforce so that our country can remain productive, competitive and admired around the world,” Mr Coulton said.