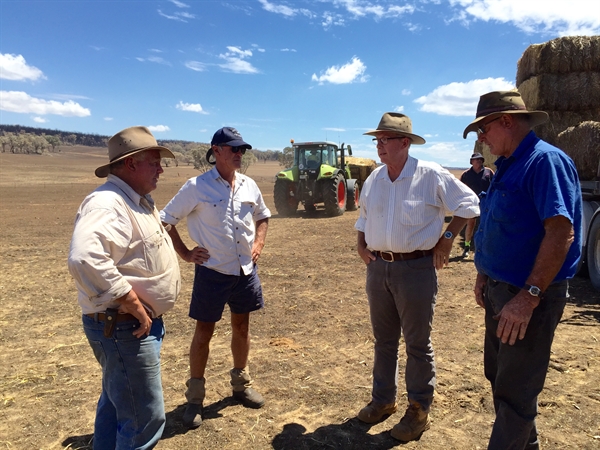 Federal Member for Parkes Mark Coulton welcomed the declaration by the Minister for Revenue and Financial Services, Kelly O’Dwyer, that the February 2017 ‘Sir Ivan Fires’ bushfires were a disaster for the purposes of establishing Australian disaster relief funds.
“Following the fires, the Member for Parkes, Mark Coulton, immediately raised the plight of his local community with me and the need to support them in getting back on their feet,” Minister O’Dwyer said.
“I know that Australians have a big heart and this declaration will allow new funds and qualifying existing funds established for the relief of people affected by the Sir Ivan Fires to receive tax deductible donations.”
Mr Coulton said he was really pleased that Minister O’Dwyer understood the significant impact of this natural disaster and had acted quickly to help those in need.
“Tax deductibility of donations will assist in raising funds to help people recover and get on with their lives,” Mr Coulton said.
“The Sir Ivan fire was so intense and led to more than 55,000 hectares of country being burned out. I heard how firefighters and farmers fought hard to stop the inferno, many helping their neighbours, only to return to their own properties to find they had lost everything.
“The 12 house-community of Uarbry was almost wiped off the map with a number of homes reduced to ashes and the St. John the Evangelist Anglican Church, built in the 1920s, now nothing more than a pile of rubble.”
The funds will need to apply for formal endorsement. The Australian Charities and Not-for-profits Commission and the Australian Taxation Office are available to assist the funds in this process.
Donations to Australian disaster relief funds, established to provide relief in the aftermath of the bushfires, will be tax deductible for a period of two years from the date of this declaration.
The bushfires in this area, which occurred from 11 February 2017, have caused devastation to communities in rural New South Wales, and have resulted in widespread damage to property and the environment.
Further information on establishing an Australian disaster relief fund is available at www.ato.gov.au.