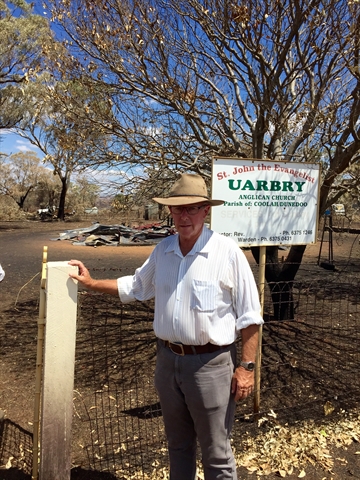 Federal Member for Parkes Mark Coulton said the announcement that Natural Disaster Relief Assistance Recovery Grant status now applied for landholders impacted by the 12 February, Sir Ivan fires was fantastic news.
He said the Category C grants would entitle bona fide primary producers to access funds of up to $15,000 which can be used to repair infrastructure like fencing and water systems, the cost of disposing of dead livestock, purchasing fodder and re-sowing or repairing perennial pastures.
“The intensity of this fire was such that many fences were completely destroyed and poly pipelines were severely damaged, as well as farmers losing sheds, buildings and in some cases, their homes,” he said.
“Right from the outset I have been working hard with my Federal colleagues to have this application signed off by Prime Minister Turnbull and this announcement will give great relief,” Mr Coulton said.
Mr Coulton paid tribute to neighbouring Federal MP, the Deputy Prime Minister and Agriculture and Water Resources Minister, Barnaby Joyce as well as state colleagues, Barwon MP, Kevin Humphries, Dubbo MP, Troy Grant and Upper Hunter MP, Michael Johnsen.
“It’s been a team effort to get this assistance signed off and we’ve been working not only with the Local Government but the state and federal levels as well,” he said.
Mr Coulton said the Category C grants were reinforced by the announcement earlier in the week by the Minister for Revenue and Financial Services, Kelly O’Dwyer, declaring the February 2017 ‘Sir Ivan Fires’ bushfires were a disaster for the purposes of establishing Australian disaster relief funds.
“I know that Australians have a big heart and this declaration will allow new funds and qualifying existing funds established for the relief of people affected by the Sir Ivan Fires to receive tax deductible donations.
“I’m really pleased that Minister O’Dwyer understood the significant impact of this natural disaster and acted quickly to help those in need.”
Tax deductibility of donations will assist in raising funds to help people recover and get on with their lives. The funds will need to apply for formal endorsement. The Australian Charities and Not-for-profits Commission and the Australian Taxation Office are available to assist the funds in this process.
Applications for the Disaster Recovery Grants can be made through the Rural Assistance Authority at www.raa.nsw.gov.au
Funding for the grants is shared by the Federal Government and the NSW Government on a 50-50 basis.