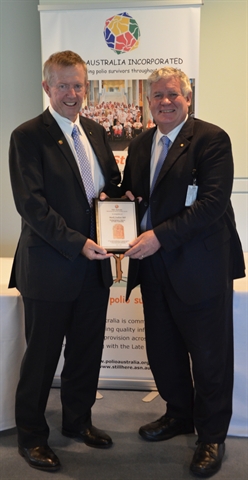 Federal Member for Parkes, Mark Coulton has met with Polio Australia in Canberra as a part of the ongoing campaign to eradicate Polio and to highlight the importance of services for those in the post-polio community.

Mr Coulton said that Polio Australia is a very active group that works towards providing support to nearly 400,000 Australians who are polio survivors.

“I have met with Dr John Tierney, President of Polio Australia over a number of years. I very much admire the work that Polio Australia does to increase awareness of the difficulties that polio survivors face,” said Mr Coulton.

“There were 40,000 cases of polio recorded between the 1930’s-1960s and probably many more. We are still discovering what the post-polio effects are, and this is why the Polio Australia support network and the Polio register is so important.”

“I am proud to be a Parliamentary Patron of Polio Australia and I encourage anyone who has been affected by Polio to get in touch with the organisation to register their support.”

In 2013 Mr Coulton hosted the Young Australian of the Year Akram Azimi in the Parkes Electorate where they discussed ongoing efforts to eradicate polio worldwide.

“We are very fortunate that there has been such an effective vaccination program but there is still much work to be done to deal with polio and it’s after effects,” Mr Coulton said.

Mr Coulton has asked that anyone who thinks that they may be suffering the late onset of polio investigate the website www.polioaustralia.org.au.