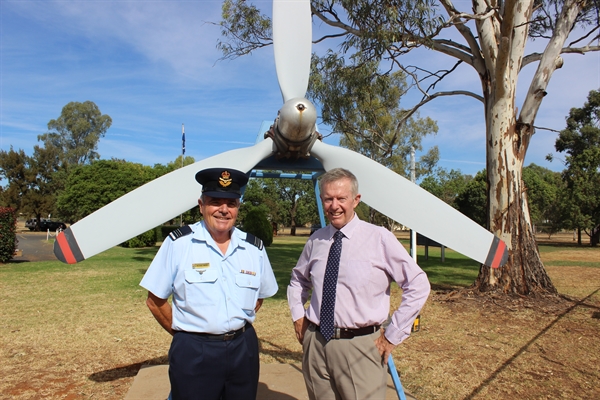 Valuable Air Force memorabilia on display at Dubbo’s Kokoda Barracks will undergo some much needed restoration this month thanks to a grant from the Commonwealth Government.

Federal Member for Parkes, Mark Coulton today met with Squadron Leader of the Australian Air Force Cadets, Michael White to congratulate him on securing a $3,000 Community Commemorative Grant for the restorations.

Mr Coulton expressed the importance of promoting appreciation and understanding of the role that those who served have played in shaping our nation.

“It is so important that we preserve our wartime heritage and to involve people both locally and right across the nation in a wide range of activities and projects that honour our servicemen and women,” Mr Coulton said.

“So many people have made so many sacrifices including people from Western New South Wales.

“There is some fantastic memorabilia here at the Kokoda Barracks and I am extremely happy that the Commonwealth Government has been able to assist with the restoration of these pieces of our history.”

This grant forms part of the Saluting Their Service Commemorative Grants Programme which is an Australian Government initiative that honours the service and sacrifice of Australia’s servicemen and women in wars, conflicts and peace operations.

Further information on this programme can be accessed on the Department of Veteran’s Affairs website at www.dva.gov.au