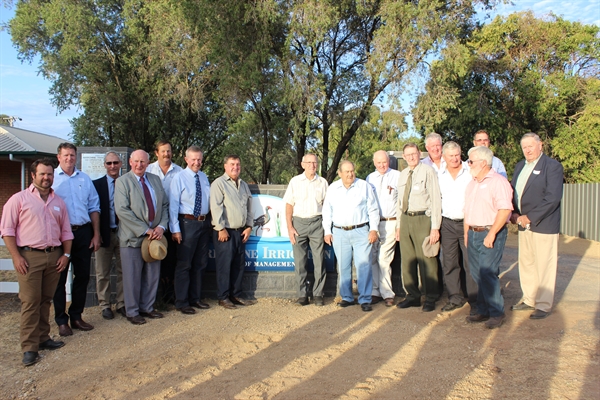 Farmers in the Narromine region are benefitting from more modern and efficient water infrastructure, with the official opening today of the Narromine Irrigation Board of Management (NIBM) Scheme.

Deputy Prime Minister and Minister for Agriculture and Water Resources Barnaby Joyce and Federal Member for Parkes Mark Coulton said the Australian Government had invested more than $60 million in the project under the Private Irrigation Infrastructure Operators Programme (PIIOP).

“Projects like this are an integral part of the Government’s vision for a productive and healthy Murray–Darling Basin. Its completion marks the achievement of another significant milestone in delivering more efficient and effective water infrastructure across the Basin,” Minister Joyce said.

“Every week, the Coalition Government is building more water infrastructure for our nation.

“Irrigation contributed to 28 per cent of Australia's agricultural production in 2012–13, adding $13.4 billion in gross value to our national bottom line. Of this, $7.1 billion—more than half—was from the Murray–Darling Basin.

“Effective water infrastructure is vital for our nation’s continued growth and prosperity which is why we are making available more than $8 billion for water infrastructure upgrades across the Murray–Darling Basin. By supporting agricultural productivity and profitability, we are underpinning economic growth as well as social and environmental benefits.”

Mr Coulton said the Government’s investment in more modern and efficient on- and off-farm water infrastructure was already delivering real benefits at the farmgate—like greater flexibility in crop choice, increased yields and the ability to produce a larger crop from lower water allocations.

“I have no doubt it will promote sustainable growth and development in the region for many decades to come.

“Works have included installing more than 190 kilometres of pipeline to supply water for domestic use and stock to up to 60 properties; decommissioning 80 kilometres of old and inefficient channels and removing approximately 100 redundant structures; and modernising the water supply control system, with the installation of up to 44 flume gates and secondary regulating structures.

“The project has not only strengthened water security, but has also benefitted the local community and helped stimulate the local economy through the use of local resources and suppliers during construction.”

“The Australian Government is focused on building the water infrastructure of the future, to deliver long-term security for our industries and communities,” he said.

“Programmes like PIIOP are an integral part of our work to secure the future of our water resources not only in the Murray–Darling Basin, but for the nation as a whole.”