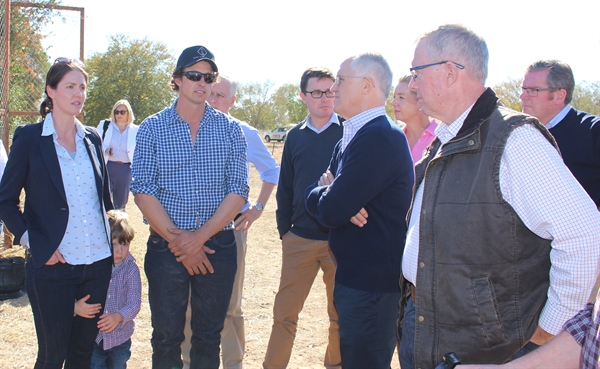 I rise to speak on the Farm Household Support Amendment Bill 2018. As the member for Eden-Monaro leaves, I'll say his was quite a thoughtful response until the last three minutes. It's a shame he wrecked it. This bill is in response to the tour that the Prime Minister, the agriculture minister, the Deputy Prime Minister, the local government minister, the regional telecommunications minister, the regional health minister and I had through western New South Wales and Queensland a couple of weeks ago. The sad reality is that this drought is really biting. In some places, people have used the household support for the three years that was part of the original requirement for this. This extension will certainly help those people out.

This farm household support is more than just the financial support that helps pay those vital bills, that puts food on the table, that puts tyres on the family car, that pays for the phone and the like. With this support comes assistance from the Rural Financial Counselling Service to help those farms that are in that difficult circumstance come up with a management plan post-drought, whatever that may be, whether it's exiting the industry or restructuring their finances to enable them to continue on. The reports that I'm getting back from the people who have been on this household support—and I think it's now about 7,000 around Australia—have been quite positive. So this extension is a good thing; it is unfortunate that we've got a drought of this magnitude where we needed to do this.

It is interesting that the member for Hunter has some ridiculous amendment attached to this very important piece of legislation. It was his party in government that removed the word 'drought' from the language of government. They were so obsessed with their discussions around climate change and emissions-trading schemes that they changed the word 'drought' to 'dryness' and said, 'This is how Australia's going to be for now and evermore; we just need to get used to it.'

I want to comment on some of the policies that the government has that are really helping people to get through this drought. I understand that many people are in serious financial difficulties, but many aren't—because of the policies that were in the white paper. I'll go through them, and I'll start with the farm management deposits, now $800,000 per farm partner to be put away: they're very useful in helping with the vagaries of the climate. To use the Walgett region as an example: they've had one good year out of four. That good year was a very good year in a cropping region, with very high income for that year through the farm management deposits. They were able to even that income out to help them through the difficult times that they're having at the moment. Another one is the accelerated depreciation for grain storages—hay sheds and silos. That has been very, very popular throughout my electorate, and as I'm driving around I see many new silo complexes and hay sheds where farmers have taken that tax advantage and invested, managing to prepare themselves for the dry times.

The other one is the accelerated depreciation for water and fencing. Particularly in the grazing areas, more in the west of my electorate, those water schemes have enabled a better use of pasture, and farmers have managed to retain their pasture longer into this drought because they've had the water points in more strategic places, rather than central watering points through large dams and whatnot. Another policy that has been of benefit in some areas is the money that has gone into cluster fencing. Late last year, I was at the opening of a 220-kilometre long fence at Gilgunyah, north-west of Condobolin. There are, I think, 10 properties inside the fence that have now been able to manage a lot of the pest animals that were really impacting on their pasture management and also on their animal health, with wild dogs and pigs having an effect on lambing percentages and the like. These are good, practical measures that we have put into place.

The previous speaker, the member for Eden-Monaro, was talking about the innovation and the good work that farmers are doing, and that's true. When we get into a dry period like this, one of the disappointments is that it looks like farmers are not managing their situation, whereas the clear majority of them are. With the farming techniques that are being used, farmers are growing crops in a climate that their parents and grandparents would not have been able to grow in. The work that's being done with zero-till, and the advances in machinery with disc planters and GPS control—all of those things have enabled farmers to deal with the drier seasonal conditions. As I said, many of the farmers in my area are managing through this.

There were some comments in the previous speeches about the Prime Minister's visit to my electorate in particular. I really think those negative comments don't relate to what I saw on the ground. The farmers were very pleased to see their Prime Minister and a large number of cabinet ministers there. If the Prime Minister had come to my electorate and made an announcement without consulting with anyone, the justifiable criticism would have been: 'No-one came and asked what we wanted. We're getting governed from Canberra.' In the Prime Minister's defence, in my 10 years—and we've had a variety of prime ministers over that period of time—I've never seen a Prime Minister put three days in regional Australia, listening to farmers, not being distracted, taking notes and being completely focused on the serious issue at hand.

In 10 years I've never seen a Prime Minister do that. I've had other prime ministers from both sides of the House visit my electorate, but not one that was so focused on the issue at hand. That was very well received.

I think that we will look at other issues apart from the farm household support. I think the work around mental health is good. That sometimes is just creating activities as a distraction to get off the farm. I remember the 1990s, when we were going through a particularly dry time. I come to this place with some experience as a farmer dealing with drought. I was a farmer for 33 years before I came here, so I've got some idea what I'm talking about. I remember that in the 1990s in a particularly severe drought a group of my colleagues undertook a beef management course. That was as much about getting together once a week, having a chat and having a few beers afterwards. It was about meeting with each other and talking through our issues and how we were dealing with things. Quite often these mental health programs in the bush are just a way for people to get together as a group and have a yarn. In Warialda a group of men are now doing yoga, believe it or not. Some of my friends would be horrified that I'm letting their secret out. They probably undo at the pub afterwards all the good they do at yoga in becoming more flexible, but it is an outlet for them to get together and work through the issues, because it is a very stressful time.

I do support this important bill. I treat the addition from the member for Hunter with the contempt that it deserves. This is sensible legislation that's needed. I think there's probably more to come as we work our way through this drought. I think there's more work we can do in the fencing space. Those things will keep people busy and improve the management possibilities in those areas. I commend this bill to the House.