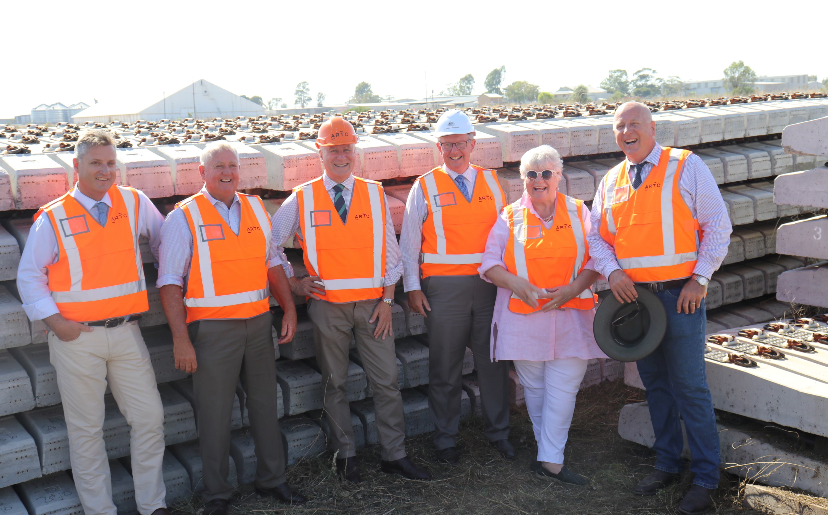 Inland Rail is one of the main reasons I got into politics, so it was with great pleasure I turned the first sod on the Narrabri to North Star section (phase one) in Moree last Friday, along with my Federal colleague, Deputy Prime Minister Michael McCormack.

It was wonderful to be joined by key local Mayors, Katrina Humphries of Moree Plains Shire, Ron Campbell of Narrabri Shire, Jamie Chaffey of Gunnedah Shire and John Coulton of Gwydir Shire, along with Inland Rail CEO Richard Wankmuller.

Inland Rail is necessary to meet our growing freight transport task for the next 50 years. This is a project that will open up eastern Australia for business and allow farmers to get their products to domestic and international markets, which is welcome news for the councils in North West NSW that represent a region rich in agriculture.

I’m pleased the community can engage with the contractor for N2NS, Trans4m Rail, at upcoming information sessions in the North West region to learn more about regional employment and supply opportunities (further details at https://inlandrail.artc.com.au/events/)

Earlier in the week, I was pleased to be joined by Gilgandra Shire Council Acting Mayor Ash Walker and Inland Rail’s Duncan Mitchell at Curban, as an agreement was signed to identify a water source for Inland Rail construction in the Gilgandra Shire, while leaving a water legacy for locals along the route. It’s clear there are many great initiatives coming from this exciting rail project that will provide meaningful benefits for decades to come.

I was very pleased to be in the western part of my electorate last week, joined by Bogan Shire Council Mayor Ray Donald OAM and General Manager Derek Francis to officially open the new canteen at Larkin Oval in Nyngan, as well as the renovated Coolabah Hall, which have both been funded under the Drought Communities Programme (DCP).

The Coalition Government committed to delivering $2 million to every council in my electorate under the DCP to stimulate local spending. These official openings mark the completion of two fantastic projects that have directly supported local jobs and local businesses – this is exactly the type of work that the Federal Government is backing right across my electorate.

While in the western region, I enjoyed catching up with local councils at Brewarrina and Bourke. It’s terrific to hear about some of the exciting community projects that are underway in this region – many being funded directly by the Federal Government – to improve local roads and community infrastructure, and ultimately stimulate local jobs. It’s no secret our regions are strong and resilient – a message I was proud to convey later in the week at a Regional Development Australia (RDA) Orana industry forum and networking event.

New National Operation Advice (NOA) from the National Heavy Vehicle Regulator (NHVR) will remove the requirement to include registration numbers from Class 3 Livestock Vehicle permits. The NOA will be implemented from 1 December.

Current provisions of the Heavy Vehicle National Law (HVNL) require that permits for Class 3 vehicles must include a description of the vehicle and a registration number. However, it is common practice for farmers who have Class 3 permits to use a third-party operator to carry their livestock.

Previously, if the permitted vehicle isn’t available at the right time, farmers needed to obtain a new permit, slowing down their ability to move livestock in a safe, timely manner. This simple change will cut this red tape, improving efficiency and animal welfare outcomes, without compromising on safety. This is a change that will have a tangible, immediate benefit for productivity as well as animal welfare.