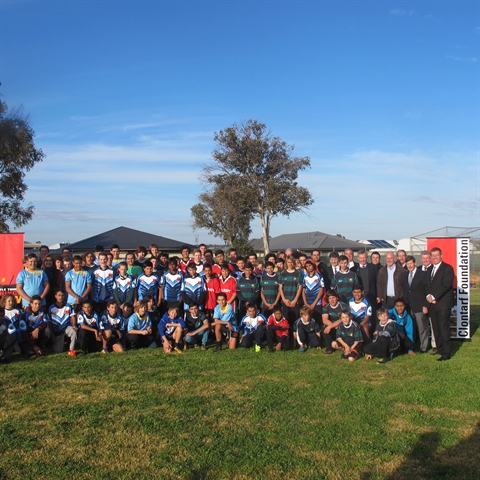 The Clontarf Foundation is making a difference in communities right across the Parkes Electorate. The Foundation operates through Academies which are associated with local schools and engages young aboriginal boys to keep them in school.

Academies have been operating in Moree, Bourke, Coonamble and Brewarrina for the past couple of years and this year a large Academy has started in Dubbo.  There are several other Academies in New South Wales at Tamworth, Inverell, Armidale and the newly opened Academy at Wagga Wagga.

The Clontarf Foundation originally started in Western Australia in 2000 and was based on the universal passion of young aboriginal boys for aussie rules football. In New South Wales the boys play rugby league and train several mornings a week.

The Clontarf Foundation has a focus on teaching the boys about routine, personal responsibility, discipline and lifeskills.

Many of the boys who benefit from the Clontarf Foundation do not have the benefit of traditional family support structures and the Foundation comes to play an integral role as they complete school, go on to further education and employment.

The opportunities that Clontarf Academies are able to bring to our communities are exciting. The boys are encouraged to take control of their lives. As a part of the program the boys set and realise goals and work towards gaining employment after high school. In some cases boys have been set up in school based traineeships and have already gained valuable work experience before completing high school.

The Clontarf Foundation also places emphasis on community involvement. In Moree, boys who are eligible from the Clontarf Academy have participated in the Red Cross Blood Drive and in Bourke, Clontarf boys volunteer with Meals on Wheels and with St Vincent De Paul. In too many cases there has been a disconnection between young aboriginal men and the wider community. This idea of community service which is promoted and encouraged through involvement with Clontarf will have many benefits for the social cohesion of our towns.

One of the greatest things about Clontarf is that it is fun. The Academies will often travel to compete against each other and this promotes and strengthens the support network that the boys will provide to each other as they grow up. The staff who work in the local Academies are dedicated and have unique skillsets which enable them to engage with the boys whilst still acting as role models.

The Clontarf Foundation receives funding from both Federal and State Governments as well as support through private partners. I encourage businesses to get in touch with their local Academies to look at ways that they can become involved with the education, training and employment of the young men coming through this excellent program.