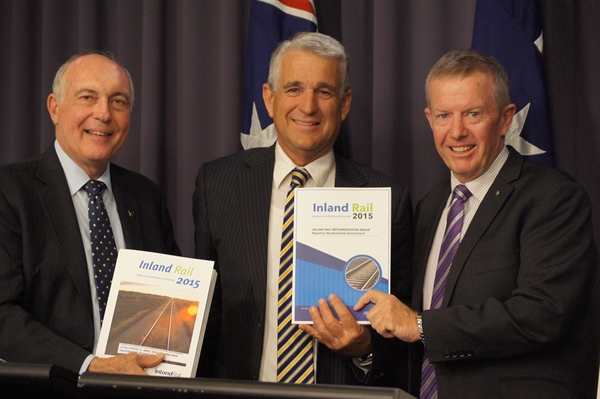 Federal Member for Parkes, Mark Coulton has welcomed the Government’s release of the Delivery Plan to build the iconic Inland Rail project that will connect Melbourne to Brisbane with a high performance freight line.

Deputy Prime Minister and Minister for Infrastructure and Regional Development, the Hon Warren Truss MP received the final Report of the Inland Rail Implementation Group from chair John Anderson AO in Canberra last week.
Mr Coulton is a passionate advocate of the Inland Rail project, a significant part of which will run through his electorate of Parkes.
“The Inland Rail will travel through Western New South Wales towns such as Narromine, Narrabri and Moree,” Mr Coulton said.
“This project is critical for dealing with our increasing freight task being experienced in these parts of my electorate with the current freight route traveling along the Newell Highway.”
Mr Coulton indicated that the project will produce multiple economic benefits throughout his electorate and beyond.
“The Inland Rail will allow freight to be transported with time and productivity savings,” Mr Coulton said.
“Regional towns across my electorate and along the route will benefit from this investment in with an increase in jobs, economic growth and prosperity.”
The Deputy Prime Minister said that the case for the iconic Inland Rail project is not hard to make.
“Inland Rail will complement existing road and rail networks and will dramatically boost productivity. Initially, it will provide for 1,800 metre long trains carrying containers stacked two high and, in the longer term, much heavier 3,600 metre long trains,” Mr Truss said.
“Without Inland Rail, additional heavy vehicles will be needed to move over two million tonnes of extra freight between Melbourne and Brisbane in 2050.
“Inland Rail will cost around $10 billion, but not building it will cost us more.”
The Delivery Plan outlines a 10-year construction timeframe to complete the 1,700km project  including some 600km of new track, and puts the cost at $10 billion.  Accompanying the plan is a detailed Business Case, developed by the Australian Rail Track Corporation.
The Deputy Prime Minister has referred the Business Case to Infrastructure Australia as part of the Government’s full consideration of this project.
The full Inland Rail Implementation Group Report is available online at www.infrastructure.gov.au/rail/inland/.
The Government will now consider the report in the context of the 2016 Federal Budget.
Category: Media Releases14 September, 2015