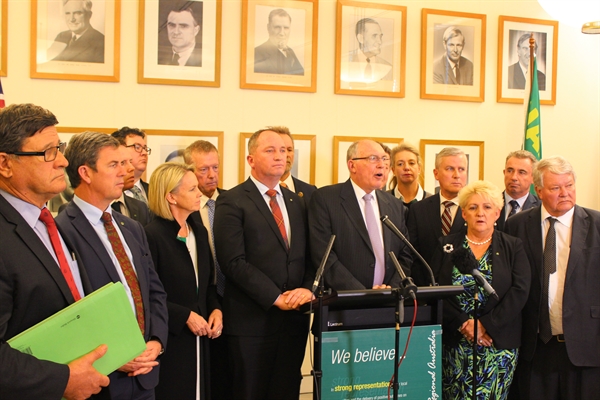 The Nationals have responded to the Liberal Party’s leadership change with a new Coalition Agreement finalised in Canberra today.

Lead by Warren Truss, the Nationals sought, negotiated and insisted on a new Coalition Agreement with Prime Minister Malcolm Turnbull following the change in Liberal leadership this week.
Federal Member for Parkes, Mark Coulton has pledged his full support for the Agreement indicating that it sets the Nationals’ agenda as part of the new Turnbull-Truss Government.
“This Agreement demonstrates that the Nationals have secured a good deal for regional Australia and will continue to deliver for regional families, businesses and communities,” Mr Coulton said.
Mr Coulton said that a broad range of key policy issues are addressed in the new Agreement providing a clear direction for the new Coalition Government.
“The key policy issues in this Agreement ensure there is no confusion as to the Coalition Government’s priorities for rural and regional Australia,” Mr Coulton said.
Following the Government’s release of the Delivery Plan to build the iconic Inland Rail project last week, Mr Coulton welcomed support for this project through the new Agreement.
“As I said last week, the Government’s commitment to the Inland Rail is pivotal in ensuring that regional towns along the route will benefit from an increase in jobs, economic growth and prosperity,” Mr Coulton said.
Another key policy matter affecting Mr Coulton’s electorate is water policy.  Under the new Agreement, responsibility for water policy outcomes will be transferred from the Department of Environment and the Murray Darling Basin Authority to the Agriculture Portfolio.
Mr Coulton is confident that this change will ensure that the implementation of the Murray Darling Basin Plan will be resolved in an efficient and effective manner.
“Implementation of the Murray Darling Basin Plan is an issue that has been affecting farmers and irrigators across my electorate for years,” Mr Coulton said.
“I am certain that everyone involved with the Plan just want this matter resolved as soon as possible and this change will help make this happen.”
The Agreement also includes communications policy matters including ongoing funding for communications technology including the mobile phone and television black spot programs.
Mr Coulton is very proud of his and the Federal Nationals team’s involvement in the negotiations to facilitate this new Agreement.
“As always, the leadership of the Deputy Prime Minister Warren Truss was invaluable in this process and achieving a huge boost for rural and regional Australia,” Mr Coulton said.
Category: Media Releases15 September, 2015