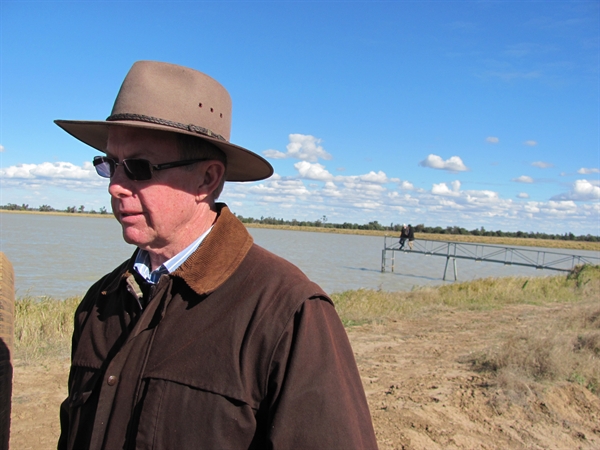 I rise this morning to express my concerns as to the current state of play with the Murray Darling Basin plan. The electorate of Parkes encompasses 24 per cent of the Murray Darling Basin and indeed my constituents are heavily reliant on the health and viability of the river system. As we are getting to the final stages of negotiation, I am concerned that there are still some key elements that are missing from this proposal. One of them is a clear environmental watering plan. We are seeing the crazy situation recently in the Gwydir valley where thousands of acres of wheat and chickpeas were flooded by misguided environmental flows. In round figures the proposal is somewhere between 3,000 gigalitres and 4,000 gigalitres are to be removed from the basin. At the moment the federal water holder has 1,500 gigs and it appears that this year will not be able to use that amount. There is a clear lack of understanding of the complexity of the Murray Darling Basin system.

The other thing that is of concern is that there is a shared component that is to come from the northern basin. This share component can really only come from two rivers, and that is the Border and the Namoi. The others are all terminal streams that go into wetland and only on very rare occasions flow-indeed for the Lachlan it is once in 100 years that the Lachlan flows through to the Darling. I am terribly concerned about the cuts that may be coming towards the Namoi and Border Rivers, considering that these communities have been in water restructure mode now for the last 20 years. This Murray Darling Basin plan is not something of recent times. In many of the basins this is the fourth lot of reconstruction that we have seen with water users.

The great underlying fear of all this is that, if a plan does eventually become agreed upon and signed off, will it be enough? With the Green elements within our society we have seen with the forest agreements that there is a sign-off and then 18 months later another campaign starts and takes it further. And if you want to know what is underlying the fear and anger in the basin at the moment it is that they do not know if this will be enough. They have done all this before, they have been doing it for 20 years and the idea that something can be signed off and agreed upon and then stay in place for years to come would be a great relief to these people. They do not trust the Greens; they do not trust the close relationship that the government has with the Greens. The great concern is that when we come up to the next election, Green preferences in marginal urban electorates will overcome the real needs of the Murray Darling basin community.