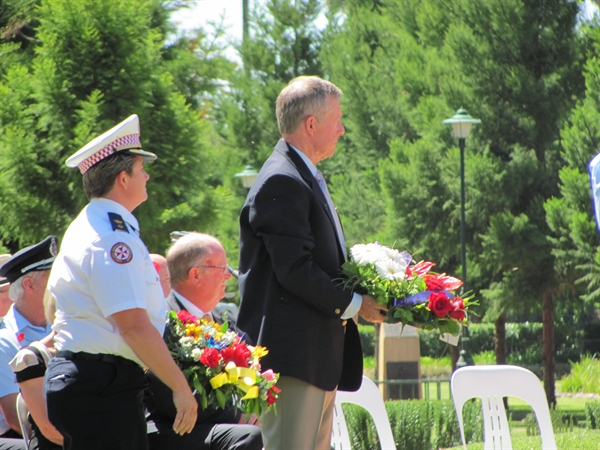 Mr COULTON: I rise today to speak on this motion that I have introduced to the parliament. The timing of this motion is also to acknowledge the importance of Remembrance Day which is less than two weeks away. I believe that Remembrance Day is one of the days of true national significance in this country and I know that the towns in my electorate take Remembrance Day very seriously.

The commemoration of the armistice at the end of World War I, ending that horrible conflict, and subsequently the memory of other conflicts that have followed, is very important to the Australian people.

It is also important to remember that, as we stand here today, we still have Australian soldiers in overseas conflicts putting their lives at risk. It is important at times like this and on Remembrance Day that we acknowledge those who are still in harm’s way. I would like to mention Nathaniel Gallagher, who was tragically killed in Afghanistan a couple of months ago and was laid to rest at Pilliga in the north-west of New South Wales. Attending Nathaniel Gallagher’s funeral certainly brought home to me the danger and the impact that our soldiers who are serving overseas have on our community.

It is important to bring forward this motion not only to mark the importance of Remembrance Day, which will be commemorated in coming weeks, but also to acknowledge that there has been, in the past, a shortfall in the recognition of Indigenous people who have contributed to Defence services. This is particularly important to the Parkes electorate, which I believe has the second-largest Aboriginal population, second only to Lingiari in the Northern Territory. Indeed, I represent more than 20,000 Aboriginal people in this parliament.

This motion is an opportunity for the chamber to acknowledge the contributions of Indigenous service men and women. It is important to note that there is significant work being done to appropriately acknowledge the efforts of Indigenous service men and women. During Reconciliation Week in May 2012, services were held in major cities across Australia to acknowledge their efforts. Services for contributions in Defence forces were also held in Canberra this year, as part of NAIDOC Week celebrations. The federal government has also been doing work in this area, such as the creation of the National Indigenous Veterans’ Liaison Officer in 2006 under the previous coalition government, and subsequently their state-based counterparts.

I believe it is very positive that the Defence forces are actively recruiting in Indigenous communities at the moment. Many opportunities are available and these opportunities will make a difference, should members of these communities take them up. What has changed, as the Defence Force actively recruits in Indigenous communities, is that during the two world wars and other conflicts there was an official restriction that prevented Aboriginal people from entering the armed forces. Many were still able to enlist, although due to limited information from the time, we now have an incomplete picture of how many Indigenous people have enlisted over the years.

The involvement of Indigenous people in the armed forces was, in many ways, an exciting time, as they were treated as equals for the first time. It was indeed unfortunate that, on their return, many people who had been comrades in arms could not celebrate together-that hotels had different areas for people of different coloured skin. Indeed, many Aboriginal people who returned from the war were quite devastated to find that not much had changed in the time that they had been away.

War is a unifying experience. The friendships formed over the years by Australians at war were strong and did not take into account a person’s background or race. The bonds built during conflicts between whites and Indigenous Australians should be celebrated in our history. Remembrance Day is an especially important time to commemorate these bonds.

I would like to speak about some things relevant to my electorate, and indeed to your electorate as well Mr Deputy Speaker. The only Aboriginal fighter pilot during the Second World War was Leonard Waters, the son of Donald and Grace Waters. In 1924, Leonard Waters was born at Euraba, the mission near Boomi in northern New South Wales, just south of the Queensland border.

When Len Waters was an 18-year-old shearer working in regional Queensland, he joined the RAAF as ground staff and commenced his training as a flight mechanic. Within the next year, Leonard had been selected to undergo pilot training in Victoria. He excelled in training and went on to graduate as a fighter pilot. Leonard Waters served his country with distinction and was laid to rest at St George in the Maranoa electorate in 1993. There is a plaque commemorating Len Waters in the park alongside the Newell Highway in Boggabilla and he is mentioned at the war memorial at Toomelah, which I will speak about in a second. A couple of years ago, I had the privilege of meeting Len’s widow, a very feisty and funny lady. She spoke about her courtship with Len Waters, which I think consisted of three dates just after he came home from the war. They were together for over 60 years before Len passed away.

I would also like to mention that at Toomelah, in the northern part of my electorate, is a memorial dedicated to Aboriginal service men and women who have served in all conflicts. I was very privileged to be part of its unveiling. Incidentally, it was constructed by local people under the CDEP program and in a place that has had some bad publicity of late. The community took a great amount of pride in the project and still do-they still care for that memorial. It is a wonderful effort from that community to commemorate past achievements of Aboriginal people.

Also, I would like to mention Councillor Victor Bartley, who is the chairman of the RSL sub-branch at Bourke. Vic approached me some months ago about the state of the war memorial in the township of Bourke. Vic is an Aboriginal chap, but he believes that all the service people in Bourke should be treated the same. Indeed, on that memorial are Aboriginal and non-Aboriginal people, but he is concerned that, because it is in such a central location, the memorial is starting to show the signs of wear and tear just from a lot of public attention. He believes that an effort should be made to upgrade that memorial. Indeed, the local council has put some money aside and has started work on it. I am hopeful that the federal government will also contribute to the memorial, because it is important. Not only now but in 50, 100 or 200 years time the residents of towns like Bourke will understand what a contribution their forefathers made, particularly their Aboriginal forefathers, who were breaking new ground. They represented their country in conflicts and should be remembered for now and evermore.