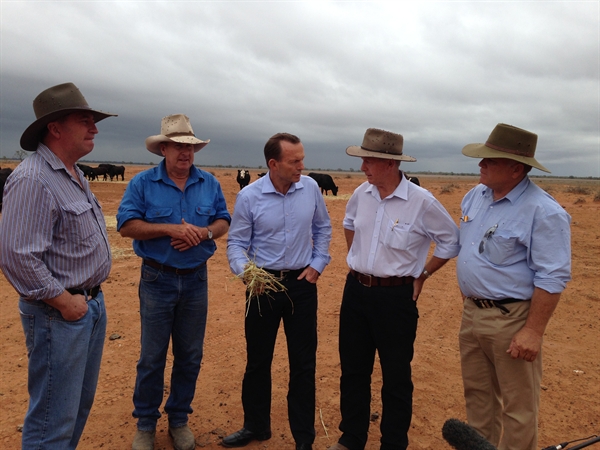 The Federal Member for Parkes, Mark Coulton believes that Prime Minister Tony Abbott’s visit to the drought affected community of Bourke was valuable in showing the plight of farmers in the North West.

Mr Coulton said he was pleased that the Prime Minister had accepted his invitation to visit the region, along with parliamentary colleague Federal Minister for Agriculture, Barnaby Joyce.

“It has been beneficial for the Prime Minister to hear first-hand the difficulties that farmers and communities in the west have been dealing with for some time now,” said Mr Coulton.

“This will be valuable information in assessing further need in the region due to the ongoing drought.”

Mr Coulton said that the Bourke community were pleased to host the Prime Minister and showed great hospitality.

“The strength of the community, as well as the hardship that they are currently facing, were both on show for the Prime Minister during his visit.”

The Prime Minister’s visit to a farm at Bourke followed on from visits by Mr Coulton and Minister Joyce to Lightning Ridge, Walgett, Coonamble and Baradine a fortnight ago.

Mr Coulton agreed that the drought has been an ongoing issue for some time and had reached severe levels.

“A drought affects not only farmers, but whole communities who are often based around the rural enterprise surrounding a country town.”

“I am always heartened by the way in which a community can pull together at such times.”

“I thank the Prime Minister and Minister Joyce for coming to Bourke today. This visit helped has helped to illustrate the wider issues that are at play in a drought of this nature.”

“While rain might have greeted the Prime Minister on the weekend, this rainfall doesn’t indicate that the drought is over.”