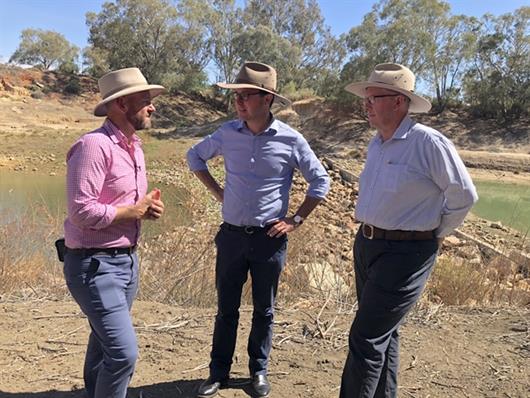 Member for Parkes Mark Coulton believes a commitment of $30 million to upgrade Wilcannia Weir will bolster the local community and add to the town’s appeal.

Announced by the Commonwealth and NSW Governments in Wilcannia yesterday, Mr Coulton said the funding has been widely welcomed.

“Locals have been calling for a new weir for decades and we’re determined to see it through,” Mr Coulton said.

“The Parkes electorate has one of the largest Indigenous populations by Federal electorate. The weir is an important place for these communities, including as a location for cultural gatherings.

“A new weir will secure the community’s future so locals can keep enjoying the Wilcannia life.”

Minister for Agriculture and Water Resources David Littleproud said first a business case would be put together to select the best location.

“We’ve got the money sitting in the bank and this business case will make sure it’s well spent,” Minister Littleproud said.

“This is one part of the Coalition Government’s commitments under the May 7 agreement with the opposition to improve outcomes for indigenous Basin communities.”

NSW Minister for Regional Water, Niall Blair said he was committed to seeing this project come to fruition.

“These studies will form the basis of the final investigations, including the consultations on the original business case which identified that the communities preferred option was a weir built downstream of the existing structure.

“This project goes beyond just providing drinking water. This weir is a place for the Wilcannia community to swim, fish and celebrate the cultural traditions it holds dear.

“I know this project has taken some time but we didn’t give up, we said we would keep going until we could deliver the funding and I am happy to say we hold true to that commitment.

“We expect that the preferred location and design of the weir to be confirmed by mid next year, with construction expected by the end of 2019.”

Member for Barwon, Kevin Humphries said he started this work as Minister for Western NSW five years ago with the then Member for Murray-Darling John Williams.

“We met with representatives of the community on the banks of the Darling River in 2013, at ‘Cemetery Rocks’, downstream of the Wilcannia township,” Mr Humphries said.

Funding for Wilcannia Weir is drawn from the Sustainable Rural Water Use and Infrastructure Program, a national program investing in rural water use, management and efficiency.

Fast Facts:
• Both Commonwealth and NSW Governments have committed up to $15 million each for a new weir
• $150,000 will be spent to build a business case for the preferred site of the new weir
• The weir upgrade is part of the Federal Coalition Government’s agreement with the opposition to improve outcomes for Aboriginal communities in the Basin.