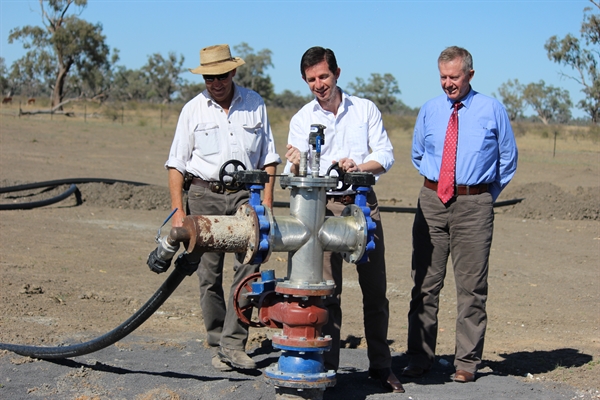 Regional and remote communities will benefit from the Australian Government’s announcement of $15.9 million to extend the Great Artesian Basin Sustainability Initiative (GABSI).

South Australia Senator and Parliamentary Secretary to the Minister for the Environment Simon Birmingham said the Initiative was one of the most significant environmental projects in the nation.

“The Great Artesian Basin is one of Australia’s primary sources of underground water, directly supporting more than 180,000 people in more than 120 towns and 7,600 enterprises in regional and remote Australia,” Senator Birmingham said.

“Despite this track record, the Labor Government axed $22 million in funding from the GABSI programme in a desperate attempt to prop up their failing budget.

“Our Government has reinstated the programme for an additional three years, continuing to 2017. This provides an opportunity not only to continue repairing uncontrolled bores, but to work with industry to develop a private sector model for more efficient water management into the future.

“I would like to thank local member Mark Coulton, New South Wales Water Minister Kevin Humphries and community and industry representatives in their efforts in advocating for future funding for GABSI.”

“Continuation of the programme is anticipated to provide further water savings of around 13 billion litres a year,” Senator Birmingham said.

Federal member for Parkes Mark Coulton welcomed the renewed funding, the benefits of which he said would be seen across the local community and environment.

“This Initiative is of great environmental benefit and this has been seen across the community in re-pressured flows emerging from bores that had previously been considered defunct.

“The renewed funding offers an opportunity beyond repairing bores  it supports the current Government’s commitment to implementing the Howard Government’s 10 Point National Plan for Water Security.

“Its sharp focus on protecting the long-term and constant supply of water is particularly important in light of the current drought conditions being experienced by farmers in this region,” said Mr Coulton.

The Australian Government will now work with the Queensland, New South Wales and South Australian governments on the provision of matched funding from the states to ensure sustainability of the programme.

The new funding arrangements will place an emphasis on improved monitoring and reporting of water use in the Basin and the work will be undertaken in the context of a new Strategic Management Plan for the Basin to be put to government and community consideration in 2015.

“The Plan will include full consideration of the future threats and pressures facing the Basin, as well as how ongoing water management aligns with the principles of the National Water Initiative,” Senator Birmingham said.

Further information on the Great Artesian Basin Sustainability Initiative is located at http://www.environment.gov.au/node/24176.