Pallamallawa to Commemorate Centenary of ANZAC 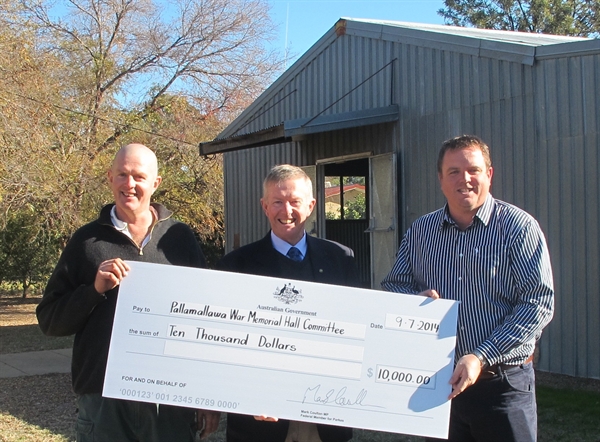 Federal Member for Parkes, Mark Coulton has commended the members of the Pallamallawa Memorial Hall Committee for the work that they have done to ensure that the community is able to commemorate the sacrifices of servicemen and women from the region one hundred years after the First World War.

Mr Coulton said that the Committee had put together a very worthy application to the ANZAC Centenary Local Grants Program.

“The Committee has received approval for their project and will receive funding from the Federal Government of $10, 000,” said Mr Coulton.

“With this funding the Committee will be constructing a new outdoor war memorial including a Roll of Honour granite slab.”

Mr Coulton said that in smaller communities like Pallamallawa the sacrifice of local men and women during the First World War had a lasting impact on the region.

“The events of World War One took place a very long way from Pallamallawa, but the contribution of the men and women from this area will be remembered.”

“The commemoration services and projects like this one at Pallamallawa show the deep and sincere respect that Australians have for the sacrifices that have been made in the past.”