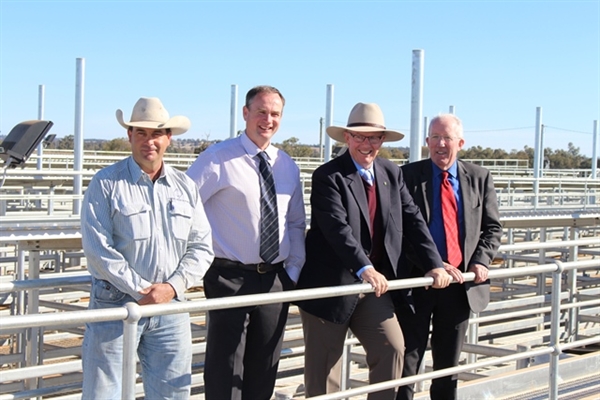 A multi-million dollar upgrade of one of the largest cattle selling complexes in the country was today opened by the Federal Member for Parkes, Mark Coulton.
The $6.6 million upgrade of the Dubbo Regional Livestock Markets will contribute to the growth of the region’s cattle industry, underpinning the state’s agricultural sector.
Mr Coulton said Dubbo’s Livestock Markets are recognised nationally in regards to cattle throughput numbers and he is delighted to see the expansion and upgrades to the cattle selling facility made possible by the $3.29 million contribution from the Government’s National Stronger Regions Fund [NSRF], which was matched dollar for dollar by the Dubbo Regional Council.
He explained how the additional capacity for improved cattle management at the saleyards would permit the handling of large cattle numbers with greater ease, with between 5000 and 7000 head passing through the facility each sale day.
Mr Coulton said the project created jobs and contributed to the growth of the region's cattle industry, underpinning the state's agricultural sector.
“Through the NSRF, the Government partnered with Dubbo City Council to deliver this project. More than 30 jobs were created during construction, with 22 ongoing jobs as a result of the upgrade—this is in addition to the 245 fulltime equivalent jobs the saleyards already support,” Mr Coulton said.
Works included the construction of a second weighbridge, 140 new selling pens, four double-deck ramps and the reconfiguration of at least two express lanes. Thirteen air-operated drafting gates and at least one ratchet rotary force yard were installed, along with an additional 32 receiving pens with buyers’ and auctioneers’ walkways.
Minister for Regional Development, Senator Fiona Nash applauded the completion of the upgrade.
“The Coalition Government is proud to be investing in critical economic infrastructure such as better and bigger livestock facilities which will support some of the region’s major industries,” she said.
“As Minister for Regional Development I aim to build the kind of communities our children and grandchildren want to either stay in or come back to, and ensuring regional centres like Dubbo have strong agricultural supply chain infrastructure is a big part of that,” Minister Nash said.
Dubbo Regional Council’s Administrator, Michael Kneipp said the Council expressed its appreciation of the Federal Government’s commitment to investing in infrastructure in regional areas and future-proofing the local economy.
“The Livestock Markets are the jewel in the economic crown for the region and we are thrilled to see the expansion and upgrades to the cattle selling facility made possible by the $3.29m contribution from the National Stronger Regions Fund.
“I would like to express our appreciation of the Federal Government’s commitment to investing in regional areas.
“With the additional capacity for improved cattle management the Dubbo Regional Livestock Markets will continue to accommodate high cattle numbers with greater ease.
“I would like to thank all the staff for their tremendous efforts in bringing this project to completion, and I would also like to express my gratitude to the Stock Agents Association for their input, collaboration and patience,” Mr Kneipp said.