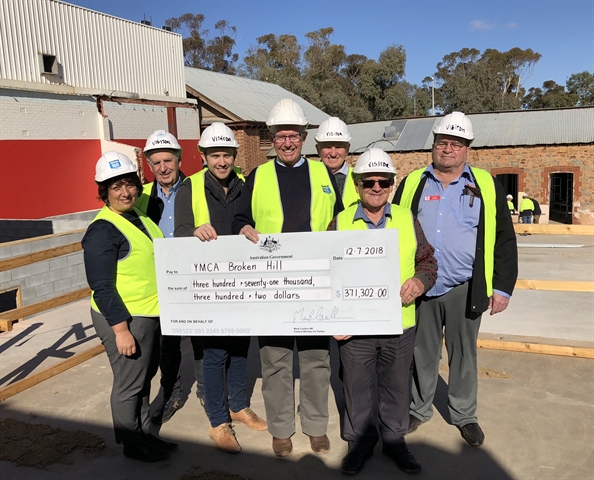 The Broken Hill YMCA will receive an upgrade to its Integrated Wellness Centre, thanks to Federal Government funding of $371,302.

Mr Coulton said the upgrade to the Integrated Wellness Centre will provide a wealth of physical and mental wellbeing benefits to YMCA members and the wider Broken Hill community.

“This is a fantastic outcome for the people of Broken Hill, who stand to benefit from the upgrade to the centre’s mezzanine including two multi-purpose spaces, a spin room, a lift and improved accessibility,” Mr Coulton said.

“This funding will go a long way to promote volunteerism, increase social interaction and inclusion, and build on community partnerships in the town.

The new Wellness Centre will create at least 17 new jobs, including three for Indigenous people.

“These benefits will have major flow-on effects across the town, ensuring our wider region continues to thrive and prosper into the future.

“I’m pleased to see this significant investment in building a stronger economy and driving jobs for the long term, and I’d like to congratulate Broken Hill YMCA on their foresight and success in receiving this funding.”

Minister for Regional Development, Territories and Local Government John McVeigh said the project will deliver significant economic and social benefits to the community.

“This means local projects are receiving the funds needed to take a big idea and make it a reality.”
YMCA NSW Area Manager Shane Simmons welcomed the funding announcement.

“We are absolutely delighted to receive this funding from the Federal Government. We’d like to particularly thank the Member for Parkes Mark Coulton, for sharing our vision for the new centre and the significant benefits it will provide,” Mr Simmons said.

“This contribution means we can deliver a wonderful facility that this town needs and deserves.”

Construction of the new centre is well underway, with major excavation and demolition works complete.

Other successful recipients of this funding round in the Parkes electorate include: