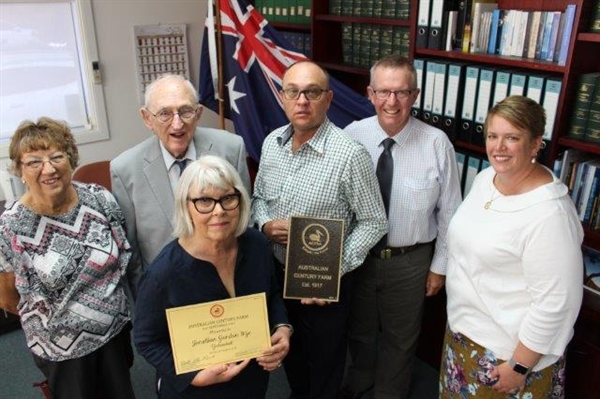 One hundred years of farming in the Nyngan district is celebrated with the presentation of a plaque from the Australian Century Farm and Station Awards to the Wye family by the Member for Parkes, Mark Coulton.
The Wye family’s connection to the 5,500 acre Soldier Settler block, Yetambah began in 1917, with the return from WW1 service by Sydney Wye, who was wounded at Anzac Cove on April 25, 1915.
Mr Coulton welcomed the opportunity to meet Sydney Wye’s son Gordon and his wife Nancy and the current owner and manager of Yetambah, Jon and Monique Wye in his Dubbo Electorate Office.
“Stories like this one are such a fabulous part of our history,” Mr Coulton said.
He said the amount of work to establish a property like Yetambah, south of Nyngan, from “scratch” in that era was amazing.
Australian Century Farm and Station Awards National Coordinator Nanette Aitken-McDonald said Century Farms is a unique program, collecting and preserving stories of farmers and station holders who have worked their land for 100 years or more.
She said Century Farms is a project established in New York State in 1937 by farmers to preserve the cultural significance of farming and agriculture to city dwellers.
For more information on the program, visit www.centuryfarms.org.au