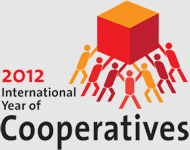 Mr COULTON (Parkes–The Nationals Chief Whip) (10:57): I too rise this morning to speak in support of this motion moved by the member for Cowper. I also acknowledge the contributions made by other members. It is important to note that 2012 is the International Year of the Cooperative and that there are over two million more cooperative members in Australia than retail share investors. Cooperatives create diversity in Australia. They play an important role in delivering services to regional and rural communities. Some Australian government industry assistance is not available to enterprises with cooperatives, and we need to call on the government to support the role of cooperatives in Australian communities and to continue working with the states and territories to implement nationally consistent laws governing the operation of cooperatives.

This is the International Year of the Cooperative, and it is:

… an acknowledgement by the international community that co-operatives drive the economy, respond to social change, are resilient to the global economic crisis and are serious, successful businesses creating jobs in all sectors.

That was a quote from the website of the International Year of the Cooperative. To quote Secretary-General Ban Ki-moon of the UN:

Cooperatives are a reminder to the international community that it is possible to pursue both economic viability and social responsibility.

One of the three goals identified by the UN in the International Year of the Cooperative was to encourage governments to establish policies, laws and regulations conducive to the formation, growth and stability of cooperatives. This is exactly what the member for Cowper’s private member’s motion calls on the government to do. There are three main areas where cooperatives have been found to have the most value: (1) poverty reduction, (2) employment generation, and (3) social integration. In my electorate, one of the largest cooperatives was established way back in 1962 at the start of the fledgling Australian cotton industry by a group of growers at Wee Waa. The Namoi Cotton Co-operative is now Australia’s leading cotton processing and marketing organisation. Namoi Cotton has a mission statement to ‘deliver quality products and services to our customers and members’. Namoi Cotton employs 120 full-time staff and over 300 seasonal and casual employees. In 1998 Namoi Cotton was the first entity to be listed on the Australian Stock Exchange while retaining its cooperative status. In 2010 Namoi Cotton ginned 516,000 bales and in 2011 1,058,000 bales-that is including the ones they did with joint ventures. The social engagement of Namoi Cotton extends to industry groups such as Cotton Australia, the Australian Cotton Shippers Association, the Australian Cotton Ginners Association, the Regional Cotton Growers Association, Moree Trade Show, Agquip, and water users groups. Namoi Cotton also encourages staff to participate in charity causes. I have to say that in the Namoi valley area, Namoi Cotton are very much part of the local community.

In 2011 Namoi Cotton’s achievements were: effective maintenance of margins through efficient and sustainable ginning operations; extensive recruitment and retention of industry-leading cotton-ginning employees; increased throughputs and efficient turnaround times for growers despite the large volumes; successful implementation of its patented round module handling technology at a further five ginning sites, providing uninterrupted handling and seamless processing of 36 per cent of ginning bales in round cotton module form-and that will soon be up to 80 per cent and then, with the changes in technology, it will probably be up to 100 per cent before much longer. Namoi Cotton is predicting a record year in 2013 with an Australian cotton crop of 4.6 million bales-so cotton is doing very well at the moment in my electorate.

Another important role of cooperatives in my electorate is in the finance sector. The member for Parramatta mentioned some of the credit unions, and some of those that she mentioned operate in my electorate as well. One of the success stories is the Bendigo Bank. It has come into communities-the one that comes to mind is Gilgandra, where some of the mainstream financiers had left the town-and, with its community engagement, it has become very much part of the community-in that case, the Gilgandra community. The credit unions that come into communities right across my electorate are also very important

To find out more about International Year of Co-operatives visit: http://2012.coop/en