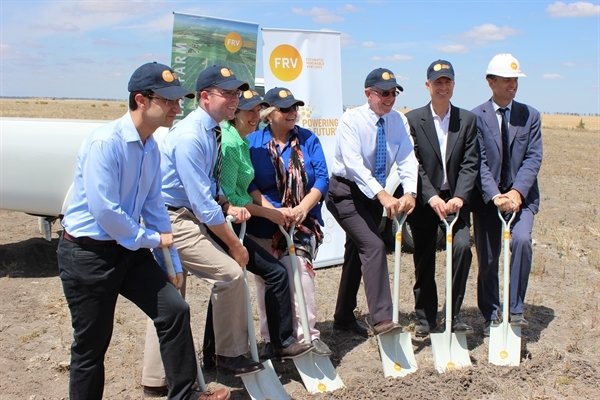 The Government’s ongoing investment in large-scale renewable energy innovation suited to the 21st century has culminated in a third utility-scale solar plant in New South Wales to successfully generate and feed solar power into the National Electricity Market.

Developed by Fotowatio Renewable Ventures and due for completion in April 2016, the Moree Solar Farm is receiving $101.7 million funding support from the Australian Renewable Energy Agency (ARENA) and $46 million in debt finance from the Clean Energy Finance Corporation (CEFC).
Minister for the Environment Greg Hunt congratulated all parties on achieving first generation and said the project was a great example of what can be achieved when government, industry and local communities work together.
“The 56 MW Moree Solar Farm was one of the first large-scale solar farms to receive federal government support in Australia and has been well supported by the Moree community, something which is vital to the success of any innovative, large-scale project,” Mr Hunt said.
“When complete, the solar farm will generate enough renewable energy to power 15,000 average Australian homes and will reduce CO2 emissions by an estimated 95,000 tonnes a year.
“Moree Solar Farm, along with two other recently completed government-supported solar farms in Nyngan and Broken Hill, are providing the knowledge and growing expertise needed to pave the way for more utility-scale solar plants to be built across Australia.”
Member for Parkes Mark Coulton said the first generation milestone at Moree Solar Farm was a significant achievement and welcomed the other benefits the project had brought to the region.
“The Parkes electorate is an ideal location for solar energy, so I am very pleased Moree Solar Farm is now feeding power into the grid and a step closer to completion,” Mr Coulton said.
“The project has had a lot of support from the community and has also been great for local job creation. During the construction phase, which commenced in March 2015, the solar plant created 150 jobs, with more than three quarters taken up by local workers.
“When complete, up to five full-time workers will operate and maintain the Moree Solar Farm over the course of its estimated 30 year operating life, while it gets on with the important work of generating solar power for Australian homes and businesses.”
Category: Media Releases1 March, 2016