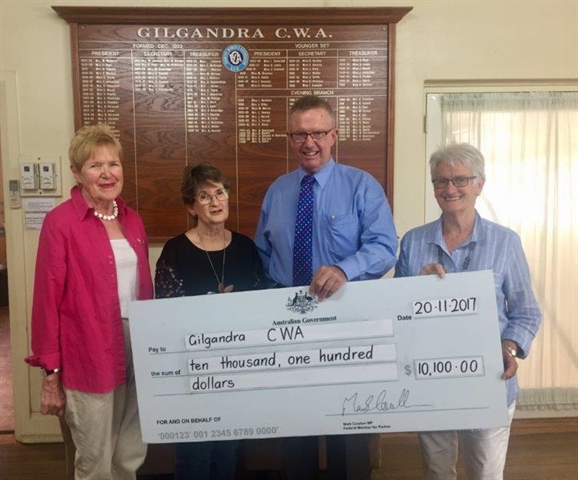 A grant of $10,100 from the Nationals-Liberal Government’s Stronger Communities Programme Round 3 will help the Gilgandra Evening Branch of Country Women’s Association of NSW build a disabilities/unisex toilet in the local branch rooms.
The Member for Parkes, Mark Coulton, said the funding will improve local community participation and cohesion and will help reinvigorate community vibrancy and viability.
“The Gilgandra CWA Rooms are being used less by the community,” Mr Coulton said.
“Gilgandra has an increasing aged and disabled population which is reluctant to attend functions in the CWA rooms because of the inconveniences associated with the present toilet facilities.
“It is anticipated that the renovation of the toilet facilities will lead to greater inclusivity with the flow-on effects of there being an increase in the use of the CWA Rooms by family groups and community organisations,” he said.
Mr Coulton said that under the programme, incorporated not-for-profit and local government organisations were invited to apply for funding for projects that will contribute to the long term vibrancy and viability of our local areas.
A passionate advocate of the Stronger Communities Programme, Mr Coulton said he was overwhelmed by the community response he received for both Rounds 1 and 2 and now Round 3 from right across the Electorate of Parkes.
“For a long time I felt there was a need for greater support for incorporated not-for-profit and local government organisations to help build and maintain small infrastructure projects that would benefit our local communities,” he said.