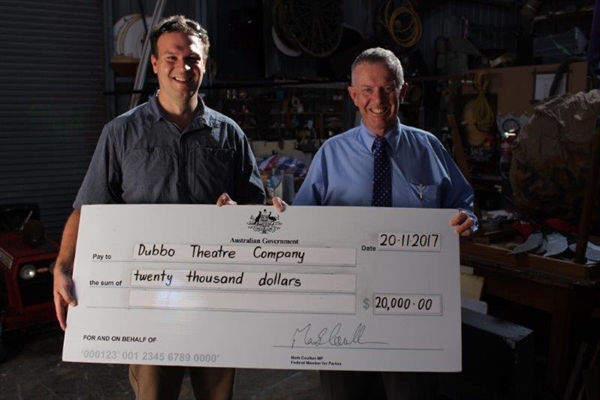 A grant of $20,000 from the Nationals-Liberal Government’s Stronger Communities Programme Round 3 will help the Dubbo Theatre Company construct a Colorbond 12m x 13m x 5m two-bay extension to an existing shed.

The Member for Parkes, Mark Coulton, said the funding will upgrade and extend the existing facility by a further 33 per cent and will provide members with a safer workshop space for construction and storage allowing more people to be involved.

“Constructed in 1980 the original shed no longer meets current needs for storage, construction and rehearsing,” he said.

“The rear wall will be partially removed to allow an entrance into an attached second facility enabling the various personnel of a theatre production team to operate in safe workplaces away from the general storage areas.

“It will build on the successful reputation as a community theatre group, to continue to deliver quality productions and to provide worthwhile experiences for members of the community who wish to participate in theatre.”

Mr Coulton said that under the programme, incorporated not-for-profit and local government organisations were invited to apply for funding for projects that will contribute to the long term vibrancy and viability of our local areas.

A passionate advocate of the Stronger Communities Programme, Mr Coulton said he was overwhelmed by the community response he received for both Rounds 1 and 2 and now Round 3 from right across the Electorate of Parkes.

“For a long time I felt there was a need for greater support for incorporated not-for-profit and local government organisations to help build and maintain small infrastructure projects that would benefit our local communities,” he said.