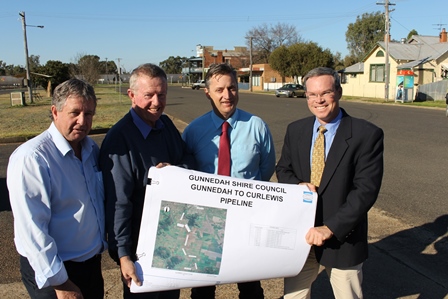 Residents of the rural township of Curlewis can look forward to a guaranteed water supply with $2.6 million from round one of the Australian Government’s Building Better Regions Fund allocated to a pipeline project in the region.
Minister for Regional Development Fiona Nash and the Federal Member for Parkes Mark Coulton announced funding for the key community project which will be undertaken by Gunnedah Shire Council.
“After a competitive merit-based selection process, Australian Government funding has been approved for four projects in the Parkes electorate under the BBRF’s Infrastructure Projects Stream including the Curlewis pipeline” Minister Nash said.
“Providing water to retain and attract residents and businesses will directly contribute to the goals of the Building Better Regions Fund to create jobs, drive economic growth and to build stronger regional communities into the future” Minister Nash added.
“The funding for this project provides just the sort of boost the electorate of Parkes needs to achieve that goal” she said.
Mr Coulton said the funding would ensure the construction of a 15.8km gravity fed pipeline from Gunnedah, along with two 0.5ML reinforced concrete reservoirs, which will provide quality water to 600 residents and businesses in Curlewis within the next 18 months.
“At present the current drinking water supply to the township is supplied by bores and the quality does not meet Australian Standards for drinking or hardness. This means residents are forced to use unsuitable water, rely on tank water from rainfall or buy in water by the truckload.
“The new pipeline will overcome these problems while the social benefits of having a quality water supply to the township will extend beyond the construction phase with a project life of the proposed pipeline of 80-100 years.
“It will ensure parity for Curlewis residents and allow the district to take advantage of all the benefits of regional living.
“Accessing Gunnedah’s water will create 25 new jobs during construction and over 20 new jobs afterwards across a range of local industries” Mr Coulton said.
“Gunnedah Shire Council has a strong record delivering major projects on time, on budget and to a high standard and I’m extremely pleased the Government will be able to work in partnership with the Council on such a vital project for the Curlewis township in my electorate” he said.
Mr Coulton said while the total project investment of $5.2million will have immediate economic and multiplier effect benefits in the Gunnedah Shire during construction, the long term benefits including the growth of employment, resources and services within the community over future generations are extremely pleasing.
Under the BBRF, the Australian Government will invest almost $500 million to foster economic growth in rural, regional, and remote communities.
Gunnedah Shire Council’s Mayor, Cr Jamie Chaffey said the funding announcement for the Curlewis Pipeline is not only fantastic news for residents of Curlewis, but the whole Shire.
“This means, the 600 Curlewis residents will now have a potable water supply that will continue to serve the community into the future,” he said.
“Curlewis is an area with high potential for residential and economic growth and it is critical these projects help us deliver what the residents and businesses need now and for future growth.
“We are so pleased that in conjunction with our Federal Member Mark Coulton and funding from Building Better Regions we can deliver this important project, which drastically improves the liveability of Curlewis. This funding makes the pipeline project achievable in the near future.
“We have consulted with Curlewis residents over a long period of time, most recently during our Community Strategic Plan community engagement and this is a great outcome,” Cr Chaffey said.
More information about the Building Better Regions Fund is available at: www.business.gov.au/bbrf