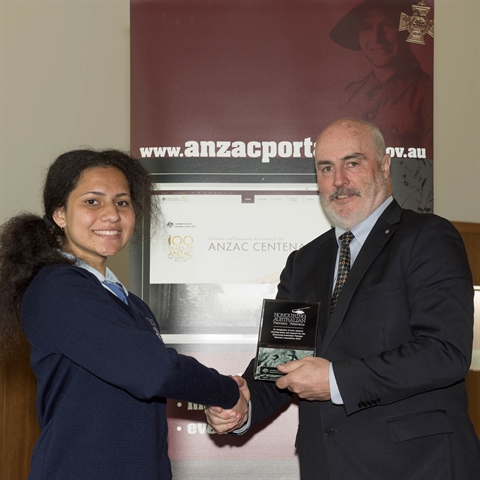 A school student from Coonabarabran High School has a won a national competition to commemorate Australia’s Vietnam War veterans on the 50th anniversary of the Battle of Long Tan.

Federal Member for Parkes, Mark Coulton said Annabelle Park was a worthy winner of the Federal Government’s Honouring Australian Vietnam Veterans Competition, which was open to all students from years 9 to 11.

“This year, as Australia honours the men and women who served in Vietnam, it is essential that future generations learn about this important chapter in our history and respect the service and sacrifice of those who defend our country,” Mr Coulton said.

“This competition encouraged students to reflect on the Australians who served in Vietnam and submit an entry that spoke about the importance of remembering and honouring their sacrifice and our wartime history.

Annabelle travelled to Canberra to participate in a commemorative program of events from 17-19 August.

The competition winners attended the national service on 18 August for the 50th anniversary of the Battle of Long Tan and received a plaque and certificate from Minister for Veterans’ Affairs Dan Tehan.

Almost 60,000 Australians served in Vietnam from 1962 until 1975. 521 lost their lives and more than 3000 were wounded. Many more veterans suffered, and continue to suffer, because of their service.

On 18 August 2016, Australia honoured the sacrifice of our servicemen and women during the Vietnam War on the 50th anniversary of the Battle of Long Tan, which is also Vietnam Veterans’ Day.