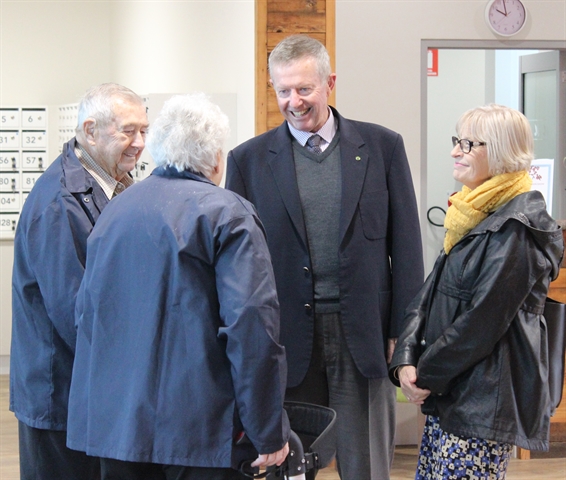 On the road
My wife Robyn and I had a busy week on the road last week attending meetings and events in Dubbo, Gunnedah and Moree.

In Dubbo, I was very pleased to join the residents and staff members of Kintyre Living to officially turn the first sod for construction of an 80-bed residential aged care facility. This facility will offer a combination of high care, low care, dementia care and in-home care which are all vital services for accommodating our ageing population in Dubbo and more broadly across Western New South Wales (NSW).

Also in Dubbo, I was honoured to have been invited to officially open the 2016 Clontarf Employment Forum. The annual Forum is a great event providing participants of the Clontarf programme with the valuable opportunity to meet prospective employers and receive advice on what they need to do before and after they finish school.

Later in the week in Gunnedah, I attended meetings with some of my constituents to discuss issues affecting north-eastern NSW. One of these meetings was with Gunnedah Meals on Wheels to discuss changes in the way the Commonwealth Home Support Programme is being administered.

As convenor of the Federal Parliamentary Friends of Meals on Wheels, I am a passionate advocate for Meals on Wheels and the significant services they provide to our community. I will be discussing the points raised in this meeting with the office of the Minister for Health and Ageing, Sussan Ley when I’m next in Canberra.

In Moree I was pleased to attend the Moree Secondary College’s Semester One Presentation where I presented students with awards acknowledging their hard work and commitment during the first half of the school year.

I agree with the Minister for Veterans’ Affairs Dan Tehan who said that the 50th anniversary of the Battle of Long Tan was an important milestone that should be marked accordingly.

A Long Tan veteran and their travelling companion will each be entitled to claim AUD$1500 for travel expenses. Any Long Tan veteran seeking details about reimbursement of travel costs can contact the Department of Veterans’ Affairs by telephone on 133 254 or by emailing commemorations@dva.gov.au.

The Battle of Long Tan took place on 18 August 1966. It was one of the fiercest battles fought by Australian soldiers in the Vietnam War, involving 105 Australians and three New Zealanders from D Company 6RAR. D Company were greatly assisted by an ammunition resupply by RAAF helicopters, close fire support from New Zealand's 161 Field Battery, together with additional artillery support from the Australian task force base at Nui Dat and the arrival of reinforcements in APCs as night fell.

ABC Heywire
The annual Heywire competition is well underway with a storytelling competition providing youth aged between 16 and 22 living in rural and regional areas with the opportunity to submit a true story about some aspect of their lives.

Heywire encourages young people to tell stories about their life outside the major cities in text, photo, video or audio format. Over the past 17 years more than 9,000 young Australians have taken part.

Winners will work with ABC Producers to have their stories featured on the ABC as well as receiving an all-expenses paid trip to the Heywire Summit in Canberra, to develop ideas to make regional Australia an even better place for young people.