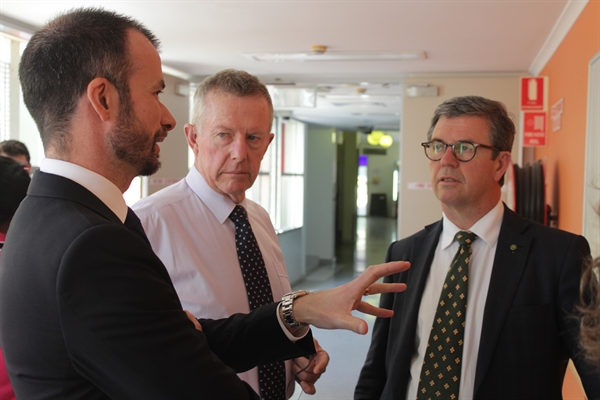 Minister Gillespie was appointed to the Rural Health portfolio following the Federal election in July this year. He comes with an extensive medical background including 21 years as a specialist Gastroenterologist and Consultant Specialist Physician in Port Macquarie.

The Minister and I met with the General Manager of Dubbo Hospital Debbie Bickerton and toured the Hospital with Director of Medicine Dr Colin McClintock.

The Minister was very impressed with the Dubbo Health precinct and I look forward to working closely with him over the current term of Parliament to help develop this precinct even more.

Local communities helping in war on wild rabbits
A new virus known as RHDV1 K5 will be trialled next year at 19 sites across the Parkes electorate in an effort to significantly reduce rabbit populations and their devastating impact on agricultural production and native ecosystems.

Rabbit populations are on the rise again and a coordinated effort is needed from all levels of government working with researchers, industry and local communities to address this pest problem.

The release of RHDV1 K5 is part of the Australian Government’s $1.2 million commitment to assist in the research and development of new rabbit controls.

Areas with high rabbit density were a priority in the site selection process, which aims to achieve maximum coverage and provide the best outcomes through a broader spread of the virus.

Rabbits are real problem in our local community and cause an estimated $206 million in lost national production each year.

I ask that local residents remain vigilant by reporting pest sightings to authorities and by recording and mapping rabbit activity in their area using the RabbitScan mobile app, which will be used to monitor the effectiveness of control measures.

Information entered in the app will provide essential data to land managers undertaking follow up controls once the RHDV1 K5 virus has been released.

Bring on the backpacker boom
The Parkes electorate could see an increase in working holiday makers after the Coalition Government launched a global $10 million campaign to attract more to Australia.

The campaign builds on the Coalition’s recent reform package, which will make Australia a world-leading destination for young people to undertake a working holiday.

Key highlights of the Turnbull Government’s reform package include:

Combined with Australia’s natural beauty and safety, conditions here are ripe for a backpacker boost.

The three-year campaign will target the United Kingdom, Ireland, France, Germany and Italy to boost the number of working holiday maker arrivals.

I’ll be working with local tourism operators to ensure our region makes the most of this new campaign.