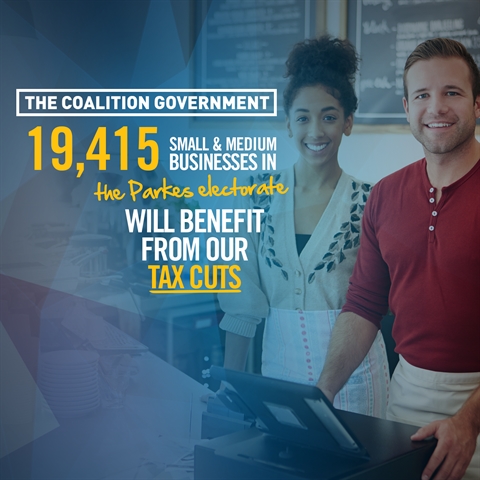 More than 19,400 small and medium sized businesses in the Electorate of Parkes will receive tax cuts so they can grow their company and employ more people as part of the Coalition Government’s visionary Enterprise Tax Plan, Parkes MP, Mark Coulton said.

He said these historic cuts will give 19,415 businesses in the Parkes Electorate and 851,910 across NSW, to keep more of the money they have earned to invest and grow their businesses so they can employ more people.

“Nationally, these tax cuts will put $5.2 billion back into the hands of small and medium sized businesses to expand on their hard work,” Mr Coulton said.

“Once the Enterprise Tax Plan is fully delivered, it will permanently increase the size of the economy by 1.2 per cent of GDP – that’s more than $17 billion in today’s dollars every single year.
“More than 3.2 million small and medium sized businesses employing 6.5 million people across the nation will benefit from cutting the tax rate. That is more than half of the Australian workforce.”
He said the Coalition Government is also pleased to confirm to have delivered on all the tax cuts which were promised during this term of government – inside the first year of the term.
Passing these cuts is critical to growing the national economy because seven out of eight people are employed by private enterprise.
“Small and medium sized businesses with a turnover of up to $50 million will benefit from the tax cut while the Turnbull government remains committed to passing the entire 10-year Enterprise Tax Plan because we know it will grow the economy, increase investment and create more jobs. That ultimately puts more money in the pockets of Australian workers,” he said.
“The Coalition Government’s national economic plan is fully funded and will grow the economy, creating more jobs in every region.”