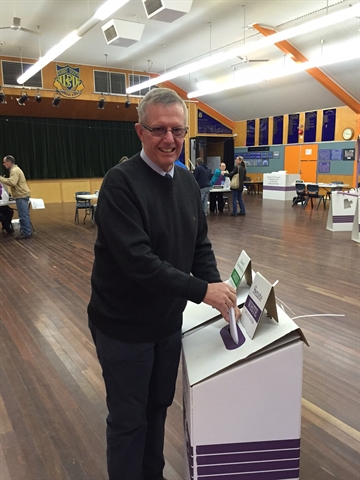 Mark Coulton has been re-elected as the Federal Member for Parkes following the election held on Saturday 2 July 2016.

Mr Coulton is absolutely humbled that the people of the Parkes electorate have thrown their support behind him for a fourth time.

“I would like to thank the people of the Parkes electorate for declaring their faith in me to represent the people residing across half of New South Wales,” he said.

“It is a great honour to represent this diverse and dynamic electorate and I look forward to continuing to provide the best possible representation to every one of my constituents.”

Mr Coulton also took the opportunity to thank his supporters who worked tirelessly throughout an exceptionally long election campaign.

“There are hundreds of wonderful volunteers across this electorate who gave up a lot of their time to help with my campaign,” he said.

“From coordinating every element of my campaign right through to working on pre-poll and polling places over the past 3 weeks, thank you to each and every person who has supported me during this campaign.

“I am very lucky to be part of one of the best political organisations in Australia with the most dedicated and hardworking volunteers.”

With the overall outcome of the Federal election still pending, Mr Coulton said he shares in the anxiety of many others across the electorate particularly in relation to the Coalition’s pledge of $25 million for an integrated cancer centre located at Dubbo Hospital.

“I remain hopeful that the Coalition will be in a position to form Government and that the cancer centre will become a reality,” he said.

“In the event that this doesn’t happen, I want to assure the electorate that I will continue to work very hard to keep the cancer centre as a priority on the Federal political agenda and continue to push for an outcome.”

The Australian Electoral Commission is expected to restart counting over the next couple of days.