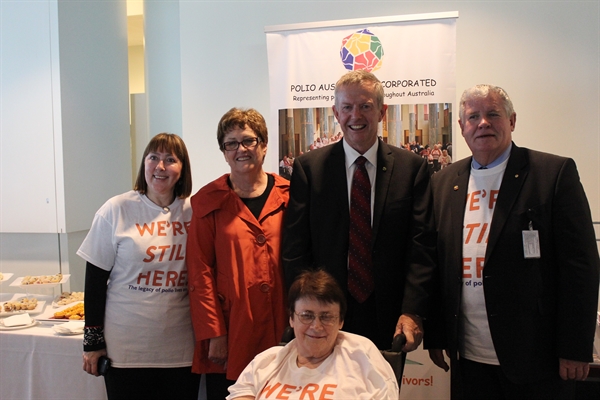 Mr Coulton, a Parliamentary Patron of Polio Australia, said that he was pleased to be able to support the organisation in promoting awareness about the difficulties polio survivors endure.

“This resource module- which is an online resource- will be useful to health professionals, especially those in allied health such as physiotherapists.”

“It is over 40 years now since the last person in Australia contracted polio and there is a serious possibility that polio will be eradicated from the globe within the next decade.”

“That such headway has been made against this debilitating virus is remarkable however many people are unaware about the late-onset effects of polio,” said Mr Coulton.

“There are probably about 400,000 polio survivors aged over 50 in Australia, which is a significant proportion of the population.”

“Polio Australia, which is largely a volunteer organisation, has been battling to bring attention to the condition and its aftereffects. I applaud their efforts to promote this issue, and the practical steps that they have taken to assist health professionals in treating polio survivors.”

To find out more information or to register as a polio survivor please visit www.polioaustralia.org.au.