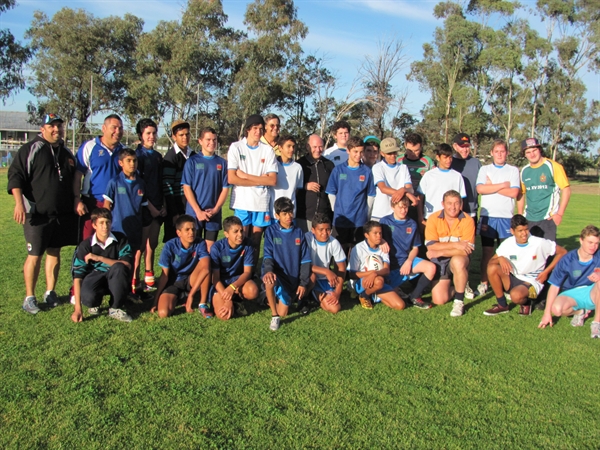 I rise tonight to bring to the attention of the House a wonderful organisation that operates around Australia-the Clontarf Foundation. Clontarf was started in Western Australia approximately 15 years ago. It is a football academy specifically for Aboriginal boys. It was based originally around Australian Rules and for probably the first 10 or 12 years was solely in Western Australia with that football code.

In the last 18 months or two years Clontarf has moved to the eastern states and, indeed, has been operating in my electorate of Parkes for the past couple of years. There are four Clontarf academies in the Parkes electorate: Moree, Brewarrina, Bourke and Coonamble. They have done an incredible job in turning around the lives of young members who are part of those academies. The academies are based within a school. The lads who join have a classroom of their own with Clontarf mentors there. In Moree, they start their day with football training. I have been to training with these lads a couple of times. They are picked up by bus at about six o’clock in the morning, taken to school and have an hour of football training, then breakfast, a bit of a meeting, a shower and then go to school.

To be a member of the Clontarf Academy the boys must attend school and if they want to undertake special excursions and treats as rewards through the Clontarf Academy they have to have that ticked off by the school’s headmaster. The turnaround in the lives of these boys in my electorate in such a short time has been astounding.

I was at the opening of the Coonamble Clontarf Academy a few months ago and many of those young men now have a clear vision of what they want to achieve. One young man spoke about his desire to be a policeman. These are lads who, before Clontarf, really did not know where they fitted in. I was speaking to some of the retailers in Coonamble and they said that before Clontarf these young men would not attend many of the businesses in town. They felt that they were not welcome and were not wanted. They did not have the self-confidence to go about what the rest of us would take for granted. But through Clontarf these boys have developed a self-esteem and a direction in life.

In Moree, for instance, Clontarf has a relationship with GrainCorp and some of those boys are now doing a school based traineeship. They work one day a week with GrainCorp and during school holidays work there as paid employees, also with continued employment when they leave school.

There has been a lot of money spent for disadvantaged Aboriginal people but I have never seen anything work as efficiently as Clontarf does. Last year at a reception here I had the privilege of hearing a young man from Geraldton who was a Clontarf boy 15 years ago. He is now probably in his late twenties or 30. Through guidance from Clontarf he works as a fly-in fly-out miner. He has a partner and a couple of children. Clontarf is still guiding him in saving for a deposit on a house. Things that many Australians take for granted, that were beyond the realms of possibility for these young men, are now being made possible.

Clontarf is funded one-third by the federal government, one-third by private industry and one-third by state government. I understand my colleagues in New South Wales at the moment are looking at supporting a further rollout of Clontarf. I particularly hope they look favourably upon this. I know that in Dubbo alone 240 boys have been identified as being suitable to attend a Clontarf Academy. It has been a great privilege for me to be part of this academy, to know these boys, to see the self-esteem and to see what wonderful young men they are and the potential they have.