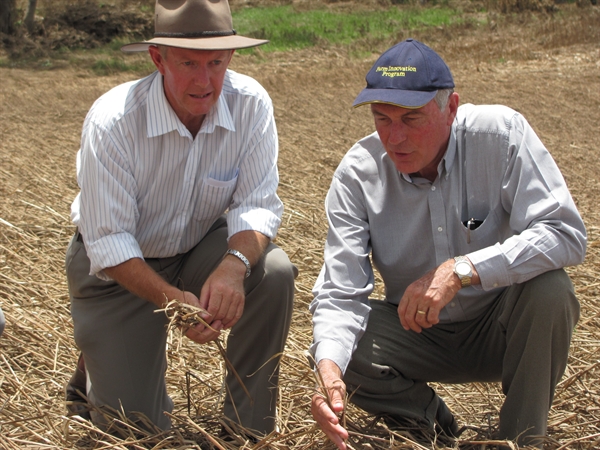 It is always a privilege to follow my colleague the member for Dawson, who never ceases to amaze me with his broad depth of knowledge and understanding of the issues that surround his electorate. For a man with a journalistic background to have that sort of grasp of agricultural issues is a real testament to his commitment and research on the job.

I do not support the Agricultural and Veterinary Chemicals Legislation Amendment Bill 2012 in its current form. This bill would lead to a net loss in efficiency of the regulator and, contrary to the stated aims, will reduce its ability to identify and review suspect chemistries. The coalition will move amendments to remove the re-registration process to ensure a net gain in efficiency, and delay the commencement for 12 months to allow a proper consultation process and time to develop new protocols and processes for the APVMA, which will minimise the disruption and cost to industry.

Reforms were supposed to reduce cumbersome assessment and re-registration processes, be more cost-effective for farmers and provide industry with timely access to the best and safest crop and animal protectants. We do support these objectives. However, instead the changes to the reregistration process contradict these objectives and instead will entrench yet another layer of red tape through an automatic seven- to 15-year review process for all chemicals with the extra costs ultimately being passed on to chemical users, the farmers. Essentially, the re-registration system adds no triggers but just another expensive recheck of the triggers funded by industry. There needs to be stringent and proper process for all farm chemicals, but the introduction of re-registration is unnecessary and burdensome.

Being a farmer, I probably have a greater understanding of the impacts of this bill than anyone. In my previous life, before coming here, I was constantly involved in the evolution and introduction of chemical processes and farm chemicals to increase productivity. One of these chemicals that will be up for re-registration, which has been on the market for over 30 years, is glyphosate.

In the late seventies and early eighties, my brothers and I, along with the New South Wales Department of Agriculture and the company Monsanto, conducted trials on our farm looking at the use of Roundup, or glyphosate, to control weeds as a replacement for cultivation. While some are using this bill as some sort of a standard to highlight farm chemicals as a bogeyman, that work that was done earlier on and the subsequent work done by many in the use of glyphosate as a farm tool has truly revolutionised the production of agriculture in Australia today. Indeed, there are now areas, particularly in my electorate, that are the centre of grain production in Australia whereas 30 or 40 years ago they would have been considered marginal grazing areas at best. These chemicals have not destroyed the environment. They have not destroyed the soil but have had indeed the opposite effect. In an area that has used chemical farming through glyphosate and other chemicals to control the weeds, one of the first things that you notice is that the microbiology comes back. Then you start to notice the earthworms returning, and the friability and the texture of the soil improving. Anyone that knows anything about soil can tell by the smell of the soil whether it is healthy or not. That research has led to a boom worth millions of dollars, not only to the farmers of Australia but also to the Australian economy.

There were two things that kept this country out of recession during the GFC: the mining industry and agriculture. One of the reasons that we still have an agricultural industry after eight to 10 years of drought is because of the work done by farmers in research with chemicals such as glyphosate. The sad reality is that, in the last five years, the focus of research by this government has been completely associated with climate change. The great irony is that, while this government gives grants to study the emissions of ruminants and to look at methane emissions from sediment ponds at piggeries and the like, the farmers that have been using glyphosate and zero till farming, largely introduced by their own wherewithal and processes, have done more for the environment of the globe than this government ever will. There is more carbon sequestered in the soils of north-west New South Wales now than there ever has been before. It is a real tragedy that this government has ripped out the funding for agriculture research looking at productions and farming systems and a whole range of other soil sciences and biology and things that the Australian farmers in the Australian economy rely on for their production, and have put their complete focus into climate change. That is going to have a negative effect.

I believe that a new chemical introduced, whether it is a drug for human consumption or a farm chemical for animals or for crop control, does need stringent testing. There is no doubt about that. But I will argue that we need to do a review every seven to 15 years on these tried and proved chemicals. It is not only in agronomy and in cropping but also in the livestock sector. In my time as a farmer, inventions such as the compound rumensin to control bloat in cattle and the continuous work that goes on in keeping ahead of worm resistance in sheep have assisted livestock production. If it was not for the work of the chemical companies in relation with farmers, in many areas now we would not see livestock production. But this continuous fight against the evolution of resistance and the ability for companies to put out new chemicals to counterbalance that keeps Australia at the head. Australian farmers are the most productive farmers in the world, without a doubt.

One of the great things that upsets me in this place is to come in and to hear minister Burke say, when he was agriculture minister, that we need to help farmers to adapt to climate change, we need to help farmers do that. Our farmers are ahead of the game. If you go anywhere in a farming area now you will find that, in competing against farmers from other countries that are highly subsidised, our farmers are more than holding their own. Indeed, they are showing the way. But what does concern me is listening to the contribution from the member from Morton here earlier today talking about Parkinson’s disease and the links to farm chemicals. It is just like members from the other side to introduce a scare campaign in an attempt to get this bill through. As the member for Dawson said, this is really a sop to the Greens. The member for Dawson mentioned diuron and the effect that the removal of that will have for the cane farmers in his electorate. It is also going to have a detrimental effect to the cotton farmers in my part of the world.

We must not underestimate the need to be constantly evolving, changing, investigating, researching and introducing new ways to stay ahead of the game. I will talk about the weed fleabane. Fleabane has become the scourge of wheat farmers over the last five or 10 years and there is a constant need to come up with different ways, different methods and different chemicals to stay in front of these weeds.

In conclusion, I do agree with some of the intentions of this bill. I do think that we need to have safe chemicals on our farms. But I do not agree with the process that has been suggested. I do not agree with burdening our farmers with red tape and I certainly will support the amendments that the coalition will bring in to this bill. This government, this House, should be working towards improving the productivity of our land with as much zeal as some in this place are working on regulations and red tape.