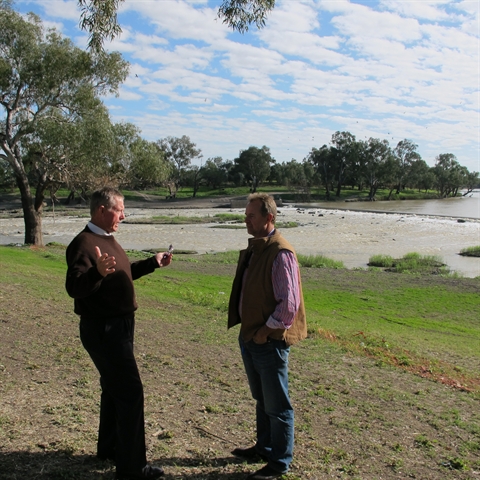 Mr COULTON (Parkes–The Nationals Chief Whip) (18:08): I rise tonight to speak on the Water Amendment (Long-term Average Sustainable Diversion Limit Adjustment) Bill 2012. This bill seeks to amend the Water Act to allow for an adjustment mechanism, as agreed by the basin states and the Commonwealth. I come into this place as a member who represents 24 per cent of the Murray-Darling Basin. I represent the communities in the rivers, from the border rivers-the Macintyre, Barwon and Darling-right down to the Lachlan. I dare say that what we decide in this place about the management of the Murray-Darling Basin will affect my constituents as much, if not more, than anyone else.

We have heard a lot of speeches in this place about the Murray-Darling Basin and the plan, and unfortunately many of them-maybe with the best of intentions and great ideals-are based on emotion and not a lot of understanding of fact. The fact of the matter is that all the rivers in my electorate are ephemeral streams. That means that traditionally they flood and then they go dry. It was only the advent of the post-war dams-the last one was completed, I think, in the 1980s-that has given us some degree of ability to manage that water. All but two of the rivers in my electorate are terminal streams. That means that they do not flow through to the Darling River. They are the Gwydir, the Macquarie and the Lachlan Rivers, and they all flow into wetlands. The Lachlan River flowed through this year for the first time in 100 years, but the Gwydir and Macquarie flow through much less frequently than that-it probably happens every five or seven years for the Gwydir and, for the Macquarie, every three or four years.

The idea is not correct that the Murray-Darling Basin is an interconnected piece of plumbing where you put water in one end and it ultimately comes out the other. As we battle our way through to finding a solution-and I do agree with the other speakers that we are in need of a solution that we can agree on-I am concerned that the actions which are proposed actually deliver what they are supposed to. There has to be an understanding that water removed from the system in one of the northern rivers in my electorate will not necessarily make it through the system. Indeed, I think the figures are that, for one megalitre to reach the Murray River from Bourke, 17 megalitres would have to be purchased. That is a huge amount of loss. This bill basically gives the basin authority the ability to adjust the sustainable limit by five per cent-that is, roughly 700 gigs. The proposal is that the minister must take note of the authority’s recommendation and that that must come into effect.

My concern is that we do not know what the makeup of the authority will be into the future-whether we will end up with people with set agendas one way or the other-and that maybe their decision will not be acceptable throughout the river. Another thing is that the Prime Minister made an announcement last week about an extra 450 gigs to be added into the system through works and measures, and the Murray-Darling Basin Authority have been negotiating and working with communities and stakeholders for a couple of years now and got to a point where 2,850 gigs would be seen as acceptable; but already that decision of the authority has not been adhered to. So the idea that the authority can be all-powerful is probably false. I understand that amendments have been discussed which would give some authority back to the minister and provide an instrument that may allow this parliament to have some input-and ultimately that may be the way to go.

The other thing that concerns me is that a lot of the communities, irrigators and farmers in my electorate have got reform fatigue. This is not something that has been going on for just a couple of years; the Namoi Valley and the Macquarie Valley have been undertaking reforms now for 20 years. I have seen four individual plans for the lower Macquarie Valley. There are a couple of things that are concerning my constituents. On several occasions they have gone through negotiations-they have actually handed back water-and all parties have reached a position on a sustainable level of extraction. They wore a lot of personal pain, with no compensation at that particular time, and then they find that there is another round and another round.

Ultimately my concern with the process we are going through now is: if we sign up and get to a plan that is acceptable for the whole length of the river, what is to stop another group from saying in three or four years time that they want more water? We have got to the point where we are in a Dutch auction: politicians can show their credentials as caring for the environment or caring for certain sections of the river by declaring a certain amount of water extraction as being suitable for the environment. But does anyone know what that means? Does anyone know what 1200, 2,800 or 3,200 gigs looks like? At the moment, 1,300 or 1,500 gigs is already out of the system-it has already been purchased and is sitting around in dams now and being used-and, frankly, no-one quite knows what to do with it. Back in June and July we saw environmental flows going down to the Gwydir wetlands, which were already full and saturated to capacity. That water was spilling out and flooding thousands of hectares of cash crops-in particular, wheat and chickpeas. Does anyone know that the Macquarie River at Warren is at only about one-quarter or one-third of the capacity of that same river at Dubbo and that there is a real constraint on delivering water through to the marshes because, at a certain level, the river spills out across private property and farmland?

The states have been asked by the Commonwealth to come up with an environmental watering plan, but at this stage we have not seen one. While I think there is a desire to get this process cleaned up so that we can move on, that should not be an excuse not to do it properly. It should not be an excuse to come to a decision because ‘Oh God, we’ve had enough of this debate and we need to move on’. That should not be enough of an excuse to come up with a plan if we do not know all the facts and figures. If you go to the bank to borrow dollars to do something in your business, you have to put in a budget to explain where those dollars are going to be used, what income they will generate, what your costs are-a full budget of how you are going to use that money. And water is no different. If an environmental asset or an irrigation farm, or whatever, wants to purchase a certain amount of water, we actually need to know what the budget for that water is-how much of it is going to the environment and how much of it is going to be used to transport that water down to that asset. And we have not got a clear environmental watering plan at this stage.

There are lots of things we can look at in this process. This plan was conceived in the middle of the worst drought in over 100 years. What I have said constantly over the last couple of years is that, with 10 years of drought and then two years of floods, we have seen that man is not the major player in the Murray-Darling Basin; man is a bit player in the Murray-Darling Basin. In the floods, witnessing them as I did, the floodwater went where it has gone for the last 1,000 years-and all the man-made infrastructure had very little impact. Likewise in the drought, when the rain stopped, all the dams in my electorate stopped running. While some people might have a concept of the river being low and there being not much water about, I can tell you that the lower Lachlan was completely dry. The farmers in my electorate had zero allocation for several years during that time. So we understand that nature is still the major player.

My ultimate concern, without casting aspersions either way as to where we will end up, is that we will end up with a plan that will have a marginal effect on the environment but a major effect on the communities. A couple of years ago, at the end of the drought, we saw that the environment of the river is far more robust than the economic environment of the towns that live upon it. While the river bounced back to full health very quickly, the communities along those rivers are still struggling to catch up-and some of them may never get back to the position they were in before the drought.

I do believe that we need to come up with a plan that is acceptable, but we do need to stick to the facts. We do not need to pander to different groups to give them something they think they want but that they do not understand the consequences of. We need to have a plan that is based on the facts. We need to have a plan that understands the complexity of this system. And so that is where we need to go. But, on the bill in front of us, I think if we are going to have this mechanism for five per cent adjustment up and down, at least the Australian parliament need to have some input into that final decision, and we do not need to leave it in the hands of an unelected group of semibureaucrats.