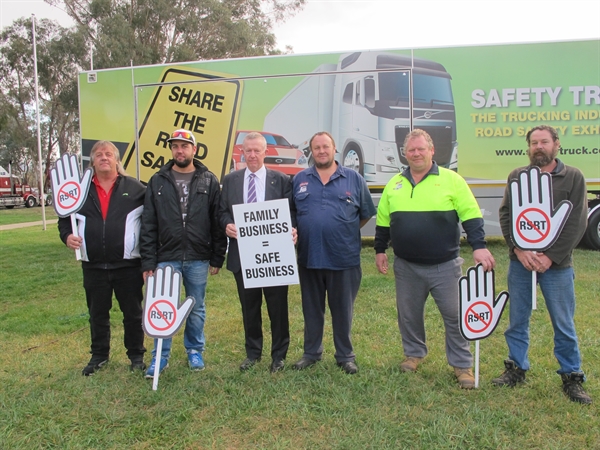 It is a shame that the member for McEwen is scurrying out, because I would like him to hear some of my comments. I agree with many of the things he said about safety and truck drivers, but what he did not say was that, unless he owned any of those trucks he had supposedly driven in a previous career, he would be exempt from the regulations that are in place at the moment. It was not the IPA that wrote to me in great distress about losing contracts, losing their house and losing their truck; it was the truck drivers in my electorate. That is why I am speaking today, not because of some right-wing think tank. I am speaking about small business owners who are being discriminated against. It would be really nice if the member for McEwen and others actually spoke the entire truth. Unless you own your own truck and drive that truck, these regulations do not count.

Over the years we have had extensive changes to fatigue management, the weights that trucks can take and compliance. A whole range of safety measures have been put in place. That is not what this legislation is about. It is called safety legislation, but if it were about safety why wouldn't it affect all truck drivers, not just the ones who own and drive their own truck?

The way it works is this: you own a truck and you go to a ready reckoner, and if you are the owner it asks how many years of experience the driver has on how many axles and for the configuration of the truck. They will come up on that ready reckoner with the rate you can charge. So far so good. It sounds good to me because I agree with the member for McEwen that truck drivers should get a fair day's pay for a fair day's work. The problem with this is that it comes up with an amount per kilometre which is higher than the going rate, so the members of the Transport Workers Union that are working for the big line-haul companies, and those companies, do not have to pay this amount.

I can go onto this ready reckoner and, if it comes up with the rate which is higher than my competitors, I have got a couple of choices: do I break the law and take a chance that I will not get caught or do I charge the higher rate and not get the work? These people are in a real bind. Despite the contact I have had through my electorate, I spoke to Greg, a truck driver from Melbourne, this morning and he already has had to park his truck because the rate that he has been told he has to charge is higher than the going rate. The contractor that he was working with has gone out and bought a couple of other trucks and employed drivers so that he is exempt.

This is not about safety; this is about anticompetitive behaviour. It is un-Australian because one of the great dreams of people is to be their own boss. There are a few ways you can do that and being a truckie is one way. But to do that, you have probably got to mortgage your house to get a deposit on the truck, then you have got to find a finance company that will back you and then you have got to get a contract that you can rely on to make your monthly repayments. It is hard work but at least you are your own boss and that is a great aspiration for people to have.

A truck driver and contractor from Tomingley, just south of Dubbo—he is trying to set up a small farm there—who runs a triple road train through to Darwin every couple of weeks, contacted me. He drives and owns one truck. Driving a triple road train is a fairly specialised occupation and purchasing a triple road train is incredibly expensive. But he was prepared to do that to have an income for his family and hopefully as off-farm income so they can establish their small property. Now he cannot compete with the other large trucking firms that are exempt from this.

We had the member for McEwen called out as a mechanic and as a tow truck driver but, unless he owned those vehicles, this legislation would be irrelevant to him. Never before have I seen such discrimination through legislation. If he wants to go back to the Hansard of 2012 like I did, he would find out that he only has to read the final speeches in detail from the then shadow minister, Warren Truss, to see these problems were highlighted in 2012 when the tribunal was set up by the member for Maribyrnong, when he was the minister for industrial relations. Those problems were highlighted, and the members of the coalition voted against it. One of the crossbenchers voted against it. If the member for Kennedy had not been paired as a Labor vote and the then member for New England, Mr Windsor, had not voted with the Labor Party in the hung parliament, this legislation would not have even got off the ground—that is how close it was. Do not talk about the coalition not being engaged in this until the last moment; we spoke about this in 2012 when the tribunal was set in place.

Not very often do we debate things in here that actually have an actual day-to-day impact on people. The guys I spoke to out there this morning were saying, 'Is this going to be done today? Is it going to be done tomorrow? What happens if the Senate gets caught up debating the Building Construction Commission? We cannot wait till after the budget week because, quite frankly, we have got a payment to make before then.' The trucks of the six drivers I spoke to this morning were parked. They were specialist trucks. A couple of the guys I spoke to were running flat tops, not the taut liners that you mostly see running up and down the highway, specialising in the types of loads that they take—steel, machinery, things like that—not the boxed commodities that you generally see going up and down the highway. They had no work.

No one more than me believes in a fair day's work for a fair day's pay or understands the need for road safety. I have got in my electorate the Newell Highway from Goondiwindi on the Queensland border to Peak Hill. In the last two weeks I have done 5,000 kilometres in my car and half of that would have been on the Newell Highway going up and down through my electorate. It is not the truck drivers that are the issue with safety on the roads; it is the other users of the highway that they have to contend with.

What is different to what you saw 10 or 15 years ago is, if you go down that highway at five o'clock in the morning, there are dozens of trucks parked off the road with the drivers having sleep breaks as per the recommendations for safety on the highway. One of the things that this government and the previous government put money on were rest areas on the highway so that truck drivers could get off the road to get a sleep away from the traffic and with facilities like toilets.

This tribunal needs to be abolished. It was a gift to the Transport Workers Union from the member for Maribyrnong when he was the minister. They have abused the power they were given. We need to make sure the drivers are protected and that we have safe rates, but we do not need to financially ruin individual people who have a dream of being their own boss or move those people across to be drivers for the large freight forwarding logistics companies, where they would be working for a wage. They need to have a fair wage. I have no problem with people who choose to work for a large company, no problem at all.

But why are we discriminating against people who have a dream of being their own boss? This is not just a matter of losing your job, because when you cannot make the payment you not only lose the truck but also you more likely will lose the house. What about the market for second-hand trucks coming up when these people exit the industry? The market will skydive down. The finance companies that are going to end up with all these trucks on their books are going to be incredibly pressured, because the big line haul companies do not buy second-hand trucks. They buy new trucks. There will be very little market as these people exit the industry.

The member for McEwen also mentioned cut-price back loads, and I agree: a freight is a freight. But, in my electorate, there are a lot of owner-operators that are in the stock transport industry. Many of them are mostly running B-doubles, some are running road trains, over large distances. There are a lot of sheep and cattle that come from Western Queensland down to places like Dubbo for sale and slaughter. If there was an opportunity on the way back up to maybe pick up a load or to take a mob of stud cattle or whatever, to cover some of the cost of fuel, what is wrong with that? Under this legislation a full kilometre rate has to be charged, which means they are priced out of contention.

I strongly urge my colleagues on the opposition benches to abandon their speaking notes handed down from the Transport Workers Union, and to think about the great Australian dream of being your own boss, working hard and getting ahead under your own hard work and initiative. This needs to be repealed. It needs to be done today. Never before has there been a more important piece of legislation for owner-operators and small business people in Australia. I commend this bill to repeal the tribunal.