Pollies in the Pub at Wanaaring a Success 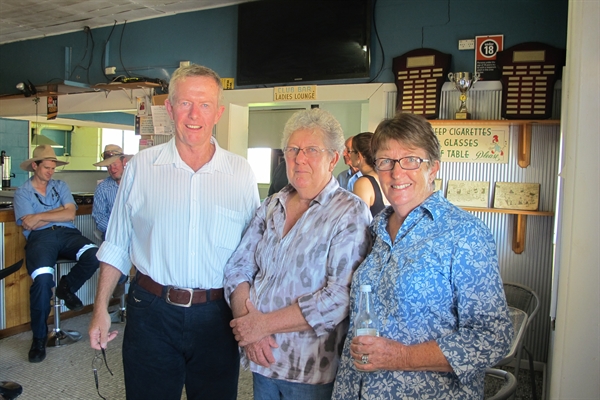 Federal Member for Parkes, Mark Coulton, recently had the chance to catch up with some locals at Wanaaring to discuss issues affecting the community.

Mr Coulton said that the “Pollies in Pub” format was particularly effective way for community members to engage with their elected representatives in an informal way.

“We had some great discussions about a whole range of issues both locally and at that nation-wide level,” said Mr Coulton.

“Obviously at the top of everyone’s list is the drought and the weather with some farmers receiving very varied rainfall in recent weeks.

It is certainly very tough so it has been good to have the chance to discuss the Federal Government’s drought package in more detail and at a personal level,” Mr Coulton said.

“Wanaaring is an interesting case not only because of its isolation but because it is on the electoral boundary. Sussan and I decided to go there together as we work together on issues that affect the community,” said Mr Coulton.

“I thank those people that were able to come along and have a chat- I thought that the discussion was very worthwhile.”

“Pollies in the Pub” was open to all members of the public however if you were unable to attend the event both Mr Coulton and Ms Ley can be contacted at their offices.