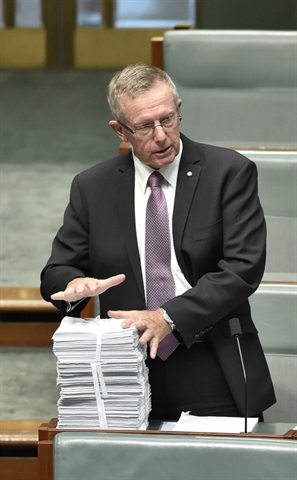 An integral step demonstrating support for the Western New South Wales integrated cancer care centre has taken place with the presentation to the Australian Parliament of a petition containing more than 45,000 signatures.

Presenting the petition, the Federal Member for Parkes Mark Coulton said each of the 45,961 signatures proved there was overwhelming support for the cancer care centre in Dubbo.

Mr Coulton said while funding had already been committed to the centre, including $25 million from the Federal Government, the presentation of the petition was symbolic of the region’s unwavering commitment to see the project become a reality.

The Western New South Wales integrated cancer care centre will be built in stages 3 and 4 at Dubbo Base Hospital at a cost of more than $50 million and is expected to be completed in 2019.

Mr Coulton said the petition was part of a campaign that had grown to become something bigger than anyone could have imagined.

“Earlier this year I was approached by a delegation led by the West Dubbo Rotary Club, clinicians Dr Honeyball and Dr McClintock, and other health professionals from Dubbo Base Hospital, and representatives from the Aboriginal community through the Jimmy Little Foundation, pushing for a cancer care centre in Dubbo” Mr Coulton said.

“A small band of helpers, led by Lyn Smith, distributed the petitions right through Western New South Wales in towns like Bourke, Brewarrina, Nyngan, Cobar, Gilgandra, Coonabarabran and other places with the end result being the presentation of the petition to the Australian Parliament” he said.

Mr Coulton acknowledged the tireless efforts of Lyn Smith and Jimmy Little Foundation trustee Frances Peters-Little who travelled to Canberra to witness the presentation of the petition.

He told Parliament of the many reasons the cancer care centre was intrinsic to the region’s health care facilities.

“It is important for the people of western New South Wales to travel to Dubbo, where they have family connections, for treatment rather than make the arduous journey to Sydney” Mr Coulton said.