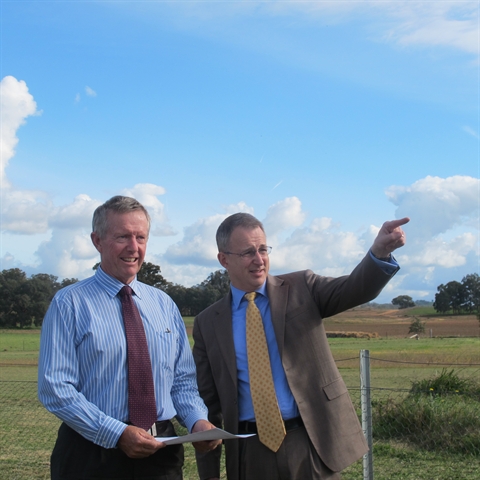 Mr Coulton thanked Mr Fletcher for taking the time to come out to the electorate to discuss the black spot programme.

“This is obviously a very busy time following on from the release of the Budget, so I am grateful that the Parliamentary Secretary travelled to speak with people on the ground who appreciate the impact that a black spot has on a community,” said Mr Coulton.

“I am proud to be a part of a Government who wants to work with the community and with mobile carriers to improve mobile reception. After nearly 7 years of Labor Government, when not one cent was spent on improving mobile black spots, this $100 million investment is very welcome.”

Mr Fletcher met with stakeholders in Coonabarabran and in Goolma. Mr Coulton said that while he was aware that there were many black spots right across Western New South Wales these two towns would illustrate many of the issues experienced in areas of poor or zero coverage.

“We have received extensive feedback from communities in the Electorate of Parkes on the design and implementation of the programme and the priority locations that need improved coverage.” Mr Fletcher said.

“I welcome the input we have received in the many thoughtful submissions, and in our discussions in the Electorate, which will be carefully considered as we proceed to finalise the design of the programme.’ Mr Fletcher said.

Submissions on the Mobile Black Spot Program are available to view at www.communications.gov.au/mobile_services/mobile_coverage_programme