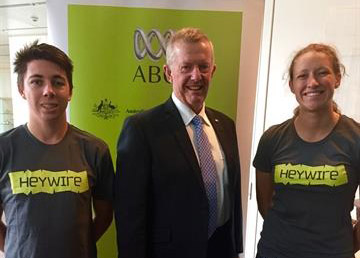 Personal accounts about Volunteering in the Outback and Sun Safety have
enabled two students from the electorate of Parkes to share their stories at
this year’s ABC Heywire Summit in Canberra.

Brian Edwards from Broken Hill and Leah Robbins from Dubbo have joined
more than 40 young storytellers from around Australia in a week of leadership
training under the programme which is an initiative of the ABC in partnership
with the Federal Government.

Speaking with the Federal Member for Parkes Mark Coulton at a Parliament
House reception in Canberra today both students commended the programme which
provides a platform for the ideas, aspirations and stories of regional youth.

Mr Coulton praised Brian and Leah describing them as worthy ambassadors
for their home cities of Broken Hill and Dubbo.

“Both Brian and Leah have put their thoughts on paper to portray their
own stories from their own regions through the excellent forum that is Heywire”
Mr Coulton said.

“In Brian’s case, he detailed his time as a volunteer with St John’s
Ambulance which took him to events like the 4×4 Challenge, horse riding and
motorbike events, rodeos and the Bathurst races where he contributed to keeping
participants safe” Mr Coulton said.

“I was particularly impressed with Brian’s account of accompanying
Constable Stuart Churchill on his 100km walk from Menindee to Broken Hill to
raise awareness for suicide prevention” he said.

“Leah’s story about sun safety was another outstanding story about a
pertinent issue and how it has taken generations to change the perception that
sunburn is a part of life” Mr Coulton said.

“Through her own eyes and her own experiences, Leah compared her
grandfather’s sun ravaged skin contributed to by his years as a dairy farmer
near Narromine to her own weekends playing cricket”.

“Wearing collared shirts, hats and sunscreen is the norm for Leah in her
efforts to combat the sun which she refers to as the ‘silent cell sizzler’” Mr
Coulton added.

Mr Coulton congratulated both students on their winning entries in the
Heywire competition and encouraged those aged between 16 and 22 in the
electorate of Parkes to consider entering this year’s competition.

More details can be found at http://www.abc.net.au/heywire/