New vaccine strengthening health of youth in the Electorate of Parkes 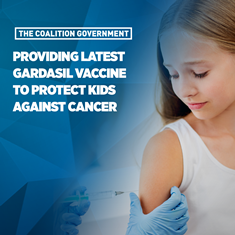 The Member for Parkes, Mark Coulton said the Nationals-Liberal Government is providing young people in the Electorate of Parkes with free access to the new Human Papillomavirus (HPV) vaccine from the start of 2018 to protect against more strains of HPV infection.
The new Gardasil® 9 vaccine will offer protection against nine strains of HPV (up from four), expanding protection against the virus and improving the health of the youth now and into the future.
Mr Coulton said Gardasil® 9 is the most comprehensive and effective HPV vaccine ever and it only requires two doses (down from three), making it easier for young people to receive the full schedule and be fully protected.
He said that as part of the National Immunisation Program, Gardasil® 9 will be provided through school based programs to all 12 to 13 year old boys and girls in years 7 or 8.
“Having the HPV vaccine on time through a school-based program maximises protection for girls and boys,” Mr Coulton said.
“Schools have been used for many years to deliver successful immunisation programs, including pertussis (whooping cough), varicella (chicken pox), and Gardasil®.”
Australia was the first country to introduce a free national HPV program, starting with girls in 2007, followed by boys in 2013.
Health Minister Greg Hunt said the Government’s HPV vaccination program has dramatically reduced the incidence of the HPV infection and disease in Australia.
“HPV coverage rates are now higher than they have ever been in Australia, with the proportion of 15 year olds receiving all recommended doses increasing to 78.6 per cent for girls (up from 78 per cent in 2015) and 72.9 per cent for boys (up from 67.2 per cent in 2015),” Minister Hunt said.
“High grade cervical abnormalities have also declined, with detection rates declining between 2006 and 2014 by 62 per cent in women aged 20 years or younger and 35 per cent in women aged 20–24 years.”
Up-to-date HPV vaccination coverage rates are available at www.hpvregister.org.au/