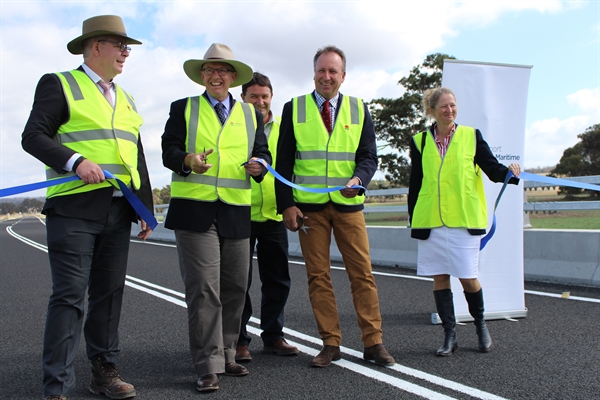 The new Uarbry Bridge on the Golden Highway, located around 30 east of Dunedoo, was officially opened today.

Deputy Prime Minister and Minister for Infrastructure and Transport Michael McCormack said the bridge was jointly funded by the Australian and NSW Governments as part of a four-year package of upgrades on the Golden Highway.

“This new bridge replaces an old, low-level causeway to provide one-in-100-year flood immunity for this section of the highway,” McCormack said.

“This will significantly reduce traffic disruptions and improve safety for all users of the highway.”

NSW Minister for Roads, Maritime Freight Melinda Pavey said of the around 1,720 vehicles that use this section of the highway each day, approximately 345 are heavy vehicles.

“The Uarbry Bridge will boost the productivity of the agriculture and mining industries by supporting access for larger heavy vehicles,” Pavey said.

NSW Member for Barwon Kevin Humphries said traffic was now across the new  concrete bridge, which is 1.85 higher than the previous causeway.

“Traffic moved onto the bridge in late February with road approaches to the new bridge completed last month. We thank the community for its patience while works took place,”  Humphries said.

The Australian Government has committed $23.8 million to the Golden Highway Belford to Dubbo improvements under the Heavy Vehicle Safety and Productivity Program, with the NSW Government providing the remaining $23.8 million.