More than $740,000 for Baradine, through Building Better Regions Fund 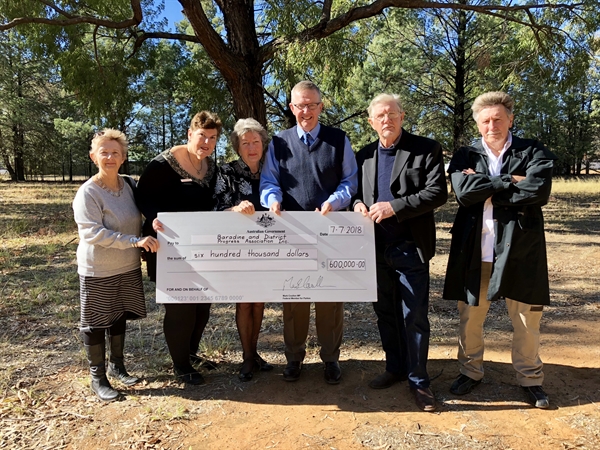 Baradine residents will reap the rewards of more than $740,000 for retirement housing and a new clubhouse, announced today by Federal Member for the Parkes electorate, Mark Coulton.

Mr Coulton said of the funding, $600,000 will go to the Baradine and District Progress Association, allowing them to develop community owned retirement housing for Baradine’s elderly and disadvantaged residents. A further $140,515 has been granted to Baradine Golf Club to build a new clubhouse.

“This is a fantastic outcome for Baradine residents, who stand to benefit from the Coalition Government’s significant investment in these projects,” Mr Coulton said.

“$740,515 worth of funding will go a long way to strengthen the social fabric of the town and boost the services and infrastructure available to those in the community.”

Mr Coulton said the funding for Baradine and District Progress Association will allow elderly and disadvantaged people to remain in the Baradine community.

“Community owned, affordable retirement housing will improve the quality of life for these groups through social connectedness. It will also reduce the social isolation that can often affect elderly and disadvantaged groups.

“A new clubhouse for the Baradine Golf Club including a kitchen, lounge area and amenities, will allow more space for social interaction, and participation in local sports.

“These are all benefits that will have major flow-on effects across town, ensuring our wider region continues to thrive and prosper into the future.”

Minister for Regional Development, Territories and Local Government John McVeigh said the projects will deliver significant economic and social benefits to the community.

“This means local projects are receiving the funds needed to take a big idea and make it a reality.”

Other successful recipients of this funding round in the Parkes electorate include:
YMCA Broken Hill – $371,302 for an upgrade of its Integrated Wellness Centre
Cobar Shire Council – $349,777 for a new memorial structure in Heritage Park