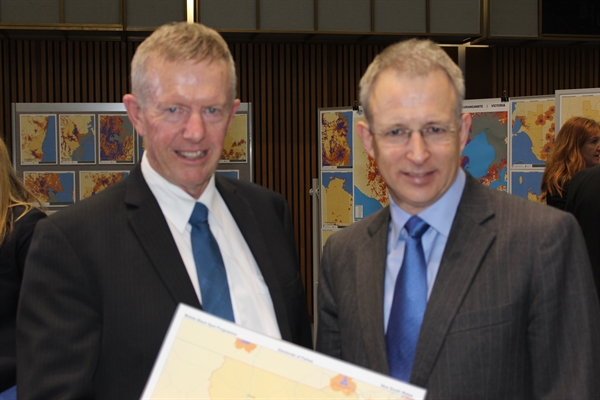 Federal Member for Parkes, Mark Coulton, has announced that the Parkes electorate will receive 10 new or upgraded mobile base stations under the Abbott Government’s $100 million Mobile Black Spot Programme.

“This is a great outcome for the region, with a total of $6.40 million to be invested on new or improved mobile coverage in local areas,” Mr Coulton said.
“207 black spots were nominated by local residents to be eligible for new or improved mobile coverage under the Mobile Black Spot Programme, and today’s announcement will see 54 of those mobile black spots receive coverage.”
In addition to the $100 million in Commonwealth funding for the first stage of the programme, a further $60 million in funding has today been announced for Round 2.
Round 2 of the Mobile Black Spot Programme, and Telstra’s commitment to build 200 new 4G mini base stations, will offer further opportunities to meet unmet demand and provide coverage to more locations around regional and remote Australia.
Parliamentary Secretary to the Minister for Communications, the Hon Paul Fletcher said that the outcome of the Mobile Black Spot Programme had significantly exceeded expectations.
“Almost 500 new or upgraded mobile base stations will be built across regional and remote Australia, covering a total of 3,000 mobile black spots from the more than 6,000 black spots nominated by the public,” Mr Fletcher said.
“The Mobile Black Spot Programme has successfully leveraged significant co-contributions from State and local Governments, mobile carriers, and third party organisations, bringing the total funding amount to over $385 million,” Mr Fletcher said.
“The Programme has delivered substantial competitive benefits, with both Telstra and Vodafone granted funding to build new or upgraded base stations. In addition, the mobile network operator selected to build a base station must give the other mobile network operators the opportunity to co-locate on that base station,” Mr Fletcher said.
“Today’s announcement to invest an additional $60 million of Commonwealth funds means that the work done under the first round of the Programme  in identifying priority locations, engaging with the mobile network operators Telstra, Optus and Vodafone and other industry participants, developing guidelines for a competitive selection process, and in canvassing local councils and state governments for their support  can be leveraged to allow the next round of funding to be deployed efficiently,” he said.
Under Round 1 of the Mobile Black Spot Programme, a database of 6,221 locations around Australia was developed, being locations nominated by Australians as needing improved mobile coverage. This database was the starting point for the competitive selection process under which the mobile network operators were asked to nominate sites where they would build new or upgraded base stations to serve the black spot locations nominated by the public, and the Government chose from the sites nominated by the mobile network operators using a ranking process specified in the guidelines.
The Government will re-open the database allowing members of the public to nominate further locations in outer metropolitan, regional and remote Australia which do not have mobile coverage.
Nominations can be emailed to mobilecoverage@communications.gov.au.
The first base stations to be funded under the Programme will begin to roll out in the second half of 2015, and the full roll out will continue over a three year period.
A map of locations which will receive new or upgraded coverage under the first round of funding under the Mobile Black Spot Programme is available from http://nationalmap.gov.au/.
Category: Media Releases25 June, 2015