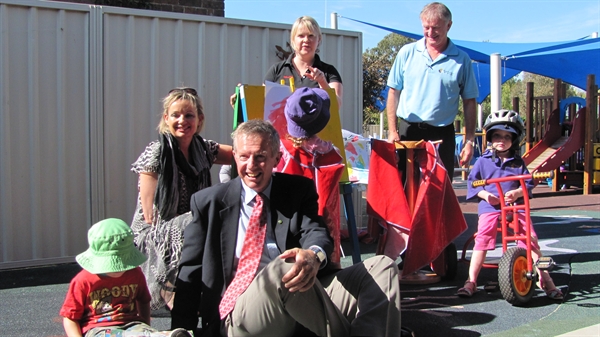 I too rise today to speak on this matter of public importance. To the member for Parramatta, yes, there has been a change of government. The coalition are in government now and that is exactly why we are going out to listen to parents, industry and providers to find out what they need and what they want to fix up the mess that child care has become. Having caused some considerable angst in the childcare industry, those opposite are clearly trying to cause trouble by raising this topic today. Rather than working with the industry and the government to uncover solutions for the childcare industry, they are only interested in trying to cover the mess they have left behind.

Labor, under the previous government, said that changes to child care would impact on fees by only an extra 57c per week. This is extremely laughable. Earlier this year and on previous occasions the assistant minister travelled to the Parkes electorate and heard evidence firsthand from parents and childcare operators. The actual increases were more likely to be in the region of $5 a day and in some cases parents experienced increases of up to $20 a day. This is a significant amount of money for a young family trying to make their way in life.

Labor’s approach to child care has been piecemeal and inadequate. On this topic, I have an interesting read that I would recommend to everyone: Maxine McKew’s autobiography. In that book she spoke about her time as parliamentary secretary and at some length about implementing the changes under the national quality framework. It is apparent that the former parliamentary secretary had good intentions but there was clearly a lack of understanding of the impact of these decisions on parents in the region, and indeed on those employed in the industry.

I am extremely glad that the assistant minister in charge of child care at the moment is from the regions. She is clearly aware of the importance of access to child care in country Australia. As opposition shadow minister, she visited facilities in my electorate in Coonamble, Dubbo, Mudgee and Narromine. I would like to briefly discuss a few of these issues that are so important in these and other places in the electorate of Parkes. In some areas, we have an urgent need for additional childcare places. The booming town of Mudgee, for instance, is undergoing a period of rapid growth. The availability of child care is a serious issue and it is impacting on suitably qualified people moving to that area. Compared to metropolitan areas, there are fewer options for parents when choosing childcare services. Flexibility and availability are key to effective childcare arrangements in growing towns like Mudgee.

We also have the serious issue of workforce shortages, an issue Labor failed to address over the last six years. Labor also failed to recognise the significant difficulties that the childcare industry has in small regional towns. Efforts have been made by this government to at least understand these issues in places like Coonamble. In regard to education retirements, a childcare worker in Coonamble does not have access to professional development. Indeed, it is 160 kilometres to the nearest TAFE to undertake training to upgrade qualifications. In many cases, some of the older workers are leaving the industry rather than taking up the challenge of upgrading to diploma level.

I welcome the government’s announcement today that we will now have the first public examination in 20 years of child care and early childhood in Australia. The needs of parents have changed markedly in the last 20 years. Parents are no longer only employed for the nine-to-five working day. I particularly welcome the Productivity Commission inquiry into the needs of rural, regional and remote families. The community and childcare sector have been invited to make submissions. I look forward to hearing the recommendations from the Productivity Commission inquiry. What is interesting about this issue is that from the smallest towns to the largest growing cities in my electorate, the most traffic coming through my office in terms of correspondence and representations is from parents concerned about getting access to adequate child care and from people who want to relocate to towns like Dubbo and Mudgee and have nowhere for their children