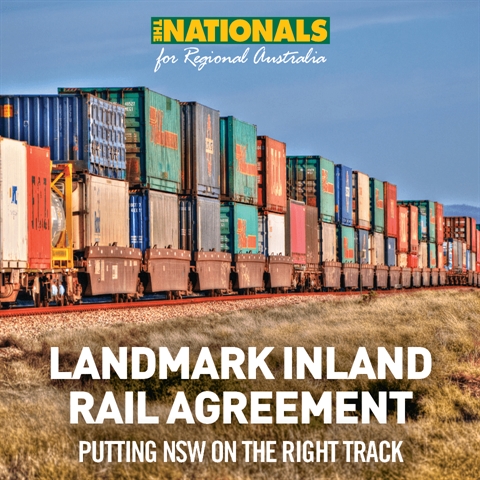 The Federal and New South Wales Governments have signed a landmark Bilateral Agreement, which makes way for the commencement of works on the multi-billion dollar Inland Rail project in NSW.

NSW is the second state to sign up to the nationally-significant project. The new agreement provides consent for the Australian Rail Track Corporation (ARTC) to deliver Inland Rail in NSW.

Deputy Prime Minister and Minister for Infrastructure and Transport Michael McCormack said the signing of the Bilateral Agreement was a landmark moment in the delivery of the project.

“Inland Rail will be a corridor of commerce for communities along the eastern seaboard and today’s agreement in Parkes is another vital step in making its vision a reality,” Mr McCormack said.

“Locals know how exciting this project is and – as a local MP – I know how Inland Rail will create local jobs and investment opportunities throughout the regions, as well as dealing with Australia’s future freight challenges well into the next century.”

Minister for Finance Mathias Cormann said the agreement provides certainty for the delivery of Inland Rail in NSW, and includes a commitment to negotiate a new long-term lease with the ARTC and protect the rail corridor.

“While construction for the Parkes to Narromine section will commence in the coming months, the agreement provides the guiding principles for the delivery of new sections of Inland Rail, including the 307 km corridor of new rail between Narromine and Narrabri,” Minister Cormann said.

“Inland Rail will provide the critical infrastructure needed to ensure Australia remains competitive by ensuring our freight and supply chain is modernised and productive to deal with the expected doubling of the freight task over the next 20 years.”

Member for the electorate of Parkes Mark Coulton said Inland Rail will deliver widespread benefits including reduced congestion on roads and rail and will pave the way for the development of inland ports in regional NSW.

“Inland Rail has the potential to completely reinvigorate parts of the elecorate of Parkes well beyond the thousands of jobs that will be created in the construction phase,” Mr Coulton said.

businesses or spend in their regional and rural towns.”

“Today’s agreement shows across all levels of Government there is a commitment to invest heavily in our regions and a commitment to co-operate to deliver a transformational project not just for the electorate of Parkes but for the country.”

Construction works will commence mid this year once all necessary approvals are received. More information about the Inland Rail project is available at https://infrastructure.gov.au/rail/inland.