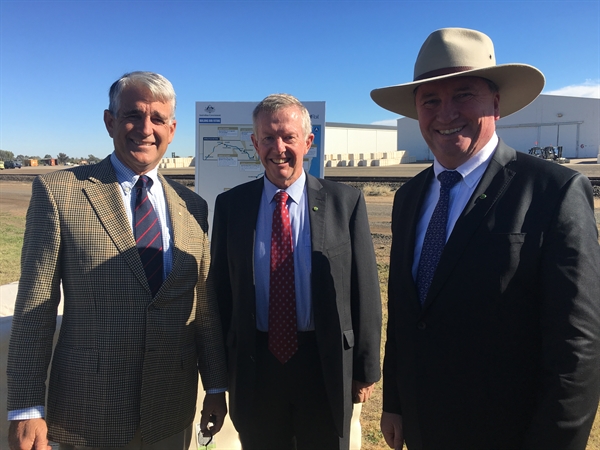 Mr Joyce said the project would create a ‘corridor of commerce’ with the project opening up endless opportunities for Australia’s key agricultural areas whilst also creating up to 16,000 jobs during construction and 700 jobs when in operation.

“By connecting south east Queensland by rail to Melbourne, Adelaide and Perth, we not only reduce the freight distance between Melbourne and Brisbane by 200 kilometres and between Brisbane and Perth by 500 kilometres, we establish a corridor of commerce and bring wealth west,” Mr Joyce said.

Mr Coulton said the Coalition’s additional commitment of $594 million to the project in the 2016-17 Budget had provided confidence to local producers that they would play a role in supplying a growing demand for Australian domestic product in Asia.

“Inland Rail is vital to addressing the increasing freight task being experienced in eastern Australia and locally grown cotton, grain, wool, beef and lamb are just a few examples of the types of product which will travel by rail rather than road to ports in Melbourne and Brisbane,” Mr Coulton said.

“The project will remove around 200,000 trucks off our road network by providing a cost-effective alternative to road transport that is 98 per cent reliable whilst reducing the travelling time of intercapital freight between Brisbane and Melbourne to under 24 hours.

“This project will support the eight million tonnes of additional freight expected to be travelling between Melbourne and Brisbane by 2050, delivering almost $22.5 billion of direct and indirect benefits to Australia.”

Mr Chester said the east coast freight corridor between Melbourne and Brisbane generates 75 per cent of Australia's gross domestic product and is responsible for commodity exports of more than $260 billion each year.

“Inland Rail is a truly transformational project that will open up the freight corridor and boost productivity for decades,” Mr Chester said.

“While the final alignment is subject to planning and environmental assessments, the $594 million provided in our most recent Budget on top of our previous $300 million commitment, will make sure that the project is soon shovel-ready and more importantly, delivered over the next decade.

“The additional funding is being directed towards refining the corridor and land acquisition. As the alignment is decided we will be providing certainty to affected landholders and communities.

“Every interstate train on Inland Rail will be the equivalent of approximately 110 B-double trucks and this removal of traffic from our road network is expected to see up to 15 fewer serious crashes reducing road trauma.”