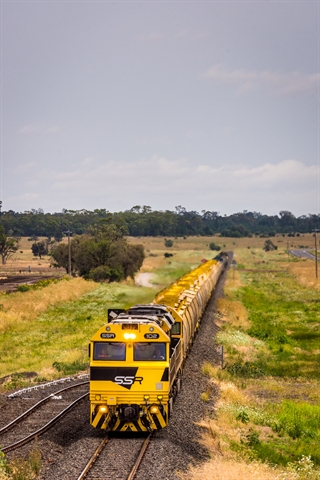 New South Wales’ north west made history today as the departure point for what is believed to be the largest, continuously-tipped export grain train in Australian history.

Acting Prime Minister and Minister for Infrastructure and Regional Development Warren Truss said the historic 1,250 metre train departing Narrabri demonstrated the massive opportunity for grain producers to save transport costs by using rail.
“The size of this train more than doubles the payload capacity of the standard grain train that currently runs through the Hunter Valley network. In simple terms, the increase in payload means at least a $5 to $10 a tonne reduction in hard costs for the grower-a massive saving,” Mr Truss said.
Federal Member for Parkes Mark Coulton said the train will unload more than 5,000 tonnes of wheat in one pass on a continuous balloon loop at the specialised Newcastle Agri Terminal at the Port of Newcastle site tonight, destined for international markets in Southeast Asia.
“With the ratification of the ChinaAustralia Free Trade Agreement, the latest of a number of free trade agreements recently signed, the opportunity for our agricultural sector has never been greater,” Mr Coulton said.
Chief Executive Officer of the Australian Rail Track Corporation (ARTC) John Fullerton said the ARTC network from Newcastle to Moree provided growers with a cost-effective solution for transporting grain.
“We have dedicated train paths ready and available today to help growers get their product to market, and through heavier, more productive trains and improved cycle times, we can help increase farm gate returns and make the entire supply chain more efficient,” Mr Fullerton said.
“While today’s train service is one of two heavy trains to run this grain season, we believe there is opportunity to run many more similar heavier train services in future harvests.”
Port of Newcastle Chief Executive Officer Geoff Crowe said the train will take advantage of the existing facilities at the port which service the agricultural sector.
“Port of Newcastle is the largest bulk shipping port on the east coast of Australia providing grain marketers and growers with modern storage and export facilities to take greater advantage of growth in Asia,” Mr Crowe said.
“The Port of Newcastle is well positioned to support the growth of NSW’s grain trade, with plenty of capacity in the rail networks to the Port, multiple grain terminals for ship loading and a shipping channel that can handle double the Port’s current total trade.”
The train was loaded with wheat from a collection of North West growers at Louis Dreyfus facilities in Moree and Narrabri. The ‘mega train’ is an initiative of the Newcastle Agri Terminal and is the result of more than six years of planning and investment.
Media Contacts
For Mr Truss:                         Brett Heffernan                  0467 650 020
For Mr Coulton:                     Amy Welham                      0448 477 830
For Mr Fullerton:                   Bas Bolyn                            0477 340 658
For Mr Crowe:                       Lauren Eyles                       0428 607 537
Category: Media Releases2 December, 2015